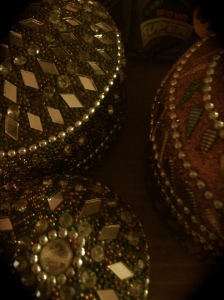 Rachael Ritchey runs a BlogBattle challenge every two weeks, and this week’s word is ‘Photograph.’ Now, I’m going to be very honest and say I’m not sure this counts as an entry, as it is a bit over the 1500 word limit. However, I liked the story so I thought I’d share it anyway.

I frowned, holding the piece of paper close to my chest.

‘C’mon babe.’ His tone grew dismissive, and I felt anger flare in my chest. ‘It’s not even real. Probably Photoshop some kid did, then printed it out.’

‘Fine. If you wanna waste your money.’ He turned away, already looking at something else. I curled my lip at him, then made my way through the piles of old books and furniture to where a man sat behind a battered counter, chewing on a pencil as he leaned back in his chair, a paperback open in one hand.

‘Um, hi,’ I said. He didn’t move. I put the photo down on the counter. ‘Hello?’ The chair creaked as he sat up, putting the paperback to one side, eyebrows raised in query.

‘I’d like to buy this.’ I pushed the photo forward. ‘Please,’ I added, though I wasn’t sure why. It wasn’t like he was going to win any awards for customer service. Still sucking on the pencil, he picked up the photo, his gnarled hands with dirty fingernails somehow feeling like an insult as they touched the paper.

‘Dollar,’ he said, dropping it back to the scratched wooden counter. I fumbled a dollar bill out of my pocket and handed it to him. He took it, and I picked up the photo.

‘Thanks.’ I was about to turn away when he spoke again, taking the pencil out of his mouth.

He raised his eyebrows again before returning to his chair, picking up his book once more. I stood there a moment longer, feeling affronted. Then I looked at the photograph.

It was sepia tinted and white-edged, the paper heavy. It showed a wicker basket with a padded interior, like a dog bed. But instead of a dog, there was a small, curled up dragon resting on the cushions. Its eyes were closed, wings folded close into its scaly body, small taloned feet tucked underneath. A wisp of smoke rose from one flared nostril, the elongated snout resting on the edge of the basket where it dipped down. Every detail was perfect, each scale perfectly outlined, shimmer of light across them hinting at jewelled splendour.

It was probably just a model, posed by an amateur photographer. I mean, a real dragon? Who was I kidding? But there was something about it that spoke to me, the paper buzzing under my fingertips. And it had only cost a dollar, after all.

A heavy hand descended on my shoulder. ‘Ready to go, babe? I’m done with all this dusty crap, anyhow.’ Without waiting for my answer he walked past me, heading for the double doors leading out to the car park. Darting an apologetic glance at the proprietor I followed along, blinking at the bright sunshine outside.

He was already in the car, revving the engine, and I felt another hot flare of anger. It was my car, not his, just like everything else. My apartment, my car, my money. But he insisted I needed him, needed protecting from the world, that with my family gone I couldn’t possibly be alone. Most of the time I agreed with him, too weary to consider another option, still grieving for parents gone too soon, siblings never born. But every so often I imagined a life where I stood strong, where I decided what I did and where I went.

There was a buzzing against my fingers and I squealed, waving my hand and almost dropping the photograph. But the bee or fly or whatever it had been was nowhere to be seen so I kept walking, feeling embarrassed as I reached the car and saw him laughing at me.

‘Look at you,’ he chuckled, ‘scared of a fly. Or was it a butterfly? Oh, you’re just such a fragile thing, aren’t you?’ He laughed some more, putting the car in gear as I put my seatbelt on, biting my lips against angry words. I looked down, turning the photograph over and over in my hands as we sped, too fast, through winding streets towards our place. Huh. That was odd. I could have sworn the dragon had closed eyes. But they were definitely open, translucent orbs with black slits like cat eyes. And they seemed to be looking at me. But they weren’t fierce, not at all – rather, they almost seemed sympathetic.

We entered the underground parking garage, tires squealing as he pulled into our parking space.

‘Wait,’ I said, surprising myself. I think I surprised him, too. He frowned at me.

‘Well, can we go somewhere else? It’s only lunchtime. Maybe we could go down to the marina, have lunch, walk along the water?’

‘Nah, babe, maybe another time. There’s a game on this afternoon and I don’t wanna miss it.’

‘Oh.’ I nodded as he got out of the car, heading for the elevator. With a sigh, I unbuckled my seatbelt and did the same.

Later, drying the dishes in the kitchen, I paused, looking out the window. The sun was setting, the sky rose gold and lavender above the shadowed palm fronds. Lights were on in the other apartments, squares of gold against the stucco. I could see people moving about, hear a woman’s laughter faintly through the opened window. They are living, I thought to myself. Living their lives how they want to.

‘Babe!’ The shout shattered my thoughts and I jumped, almost dropping the plate I was holding.

Well, why don’t you just fricking die, then, I thought, the savagery of it surprising me. Where had that come from? Feeling bad, I went to the fridge and grabbed another couple of beers, popping the top on the first one, the glass frosty against my hand as I took them into the living room and handed them to him. He took them, not even looking at me. I went back to the kitchen.

That night I had a strange dream. Something warm was in the bed with me, curled up against my stomach, heat radiating from it. But it was comforting, rather than scary, like the heat from an open fire on a cold day.

I woke late and he was gone. Where, I didn’t care. I stretched, enjoying the luxury of the empty bed, my toes pushing against the edge of the tucked sheet. I reached out to my bedside table then pulled my hand back as though stung, my fingertips buzzing. What the hell was that? Rolling over, I couldn’t see anything unusual. Then I noticed the photograph. I stared.

The dragon was sitting up.

Actually sitting up, like a dog. Small wings outstretched, taloned feet placed neatly on the cushions, its head tilted to one side. The long mouth was curved, almost as if it were smiling, and one eye was closed. It was winking at me. Goddamn winking at me.

I picked up the photo and almost dropped it, the paper vibrating against my fingers, warm like it had been next to an open flame. What the hell was going on?

I flinched. Great. He was home, and it sounded like he’d been drinking. Another session with his friends. And now he was my problem.

‘Baaaaaabe!’ he roared, anger creeping into his tone.

I stood up from the sofa, smoothing my hands down my legs as he came into the room, banging into the doorframe. His face was sweaty, dark hair flopping forward and for a moment he looked like a stranger, like I didn’t know who he was or why I would ever have been attracted to him. And the little flare of anger came again.

‘Feed me.’ He flopped down on the sofa, not even looking at me. Anger flared hotter.

‘Feed yourself.’ The words snapped out before I could stop them, and my hand flew to my mouth, as though I could take them back.

Anger flared a third time, this time so hot I could feel it like a burn inside my chest. ‘Maybe you should go.’ More words. What was happening to me? But as I spoke I felt a flutter, as though a weight was being lifted, wings starting to unfurl.

‘Wha?’ This time I could see I was getting through to him. ‘You need me.’ He got to his feet, jabbing his finger at me. ‘You need me, because you’re just-‘

‘You can’t make me.’ He moved closer, looming over me, and I took a step back.

‘I can. This is my house, and I think it’s time for you to go.’ My voice was higher and I was starting to shake, but at the same time it was as though my soul was rising, breaking free.

‘Make me.’ His brow lowered and he reached for me. But before he could touch me there was a hiss and a clatter, and a small jewelled shape swooped past me, claws extended, raking his face. I screamed, and the little dragon puffed out a fireball, just missing his ear.

He screamed as well, ducking, his hands coming up to swat at the air. And then I had a dragon on my shoulder. Little claws digging in, heat and vibration next to my ear. I could hear it hiss, then a rough warm sensation on my cheek as it licked me.

He came closer again and the hiss grew louder, becoming more like a growl.

Another fireball shot out, this time hitting him on the shoulder, singeing his shirt. He jerked as though he’d been shot.

‘Get. OUT.’ I moved forward, dragon claw courage propelling me. ‘NOW!’ As I shrieked the last word the little dragon spat another fireball at him and he turned and ran, banging into the walls as he raced to the front door. Beside my ear the little dragon shrieked and hissed, smoke billowing from its open mouth. I heard the door slam, and he was gone.

The dragon photo sits by my bed, propped up against the lamp where I can see it. Back in the basket, all shimmering scales and sepia tones. But at night, sometimes, I feel a small shape curled against me. Warm, like an open fire. Like a friend.