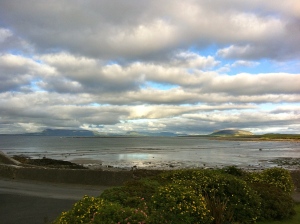 The view from our guesthouse front door.

Last year, at the end of summer we went to Sligo, up in the northwest of Ireland. It was wonderful. We visited a fairy mountain and made a wish, walked through a landscape of stone monuments older than Stonehenge and stayed on the beach at a little hotel behind an ancient pub that served the most fantastic meals.

One day we decided, perhaps in a moment of madness, to walk around the rocks that edged the coastline, leading away from the pebbly beach. It wasn’t too bad, to be honest – even the small girl could manage it, and we were amazed by the fossils visible in the ancient rock layers, as well as the deep clear ocean pools below our feet.

Around the ragged rocks…

We made it, eventually, around to what had once been a harbour and on the rocks of the small ‘beach’ we found this:

Isn’t it amazing? If I could, I would have brought it home with me. But it was incredibly heavy, despite the rust. So I took a photo instead. I’ve been meaning to have it made into a canvas – I just love the colours and the way whatever-it-is sits on the stones.

The stones were in it just as you see them – whether deposited by some other hand or the ocean waves I wasn’t sure. The beach was littered with other bits of rusting iron, remnants of a mysterious past. A curving concrete quay jutted out along one side of the little cove but it was tiny – only small boats would have come in here. Perhaps one night there was a wild storm and one of them washed up to break against the rocks, only the heaviest metal bits and pieces remaining to tell the tale.

Ireland – where even the rocks have personality 🙂

So an object found, but left where it lay. Sometimes it’s better that way.

8 thoughts on “A Mystery From The Sea”