This week I’m starting with a guest post from pink-bearded lawyer, blogger and author extraordinaire, Geoff LePard. I had the pleasure of meeting Geoff at the Blogger’s Bash in August (when his beard was pink and he went by the name ‘Geoffle’ for the day – I’m sure he was thrilled when I told him that ‘jaffle’ was an Australian slang term for a toasted cheese sandwich!). Geoff has written two books – the first called Dead Flies and Sherry Trifle, and the second and new release called My Father and Other Liars. Journey To Ambeth is the last stop on his blog tour, and he’s written an interesting piece about our desire to explore our ancestral DNA, a key theme in his latest book. Take it away, Geoff! 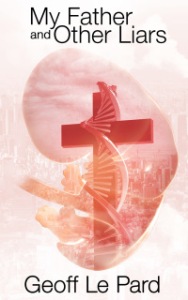 When I began writing My Father and Other Liars I decided to set up my own Church, the Church of Science and Development. As I explained over at Hugh’s Views and News, I needed to write a philosophy for this Church. At about this time, I had been reading an American Crime Writer, Tess Gerritsen. In one book, I forget which, she referenced the Ten Lost Tribes of Israel, a Biblical story that recalled days in Sunday School. This is a brief summary of the Ten Lost Tribes:

10 of the original 12 Hebrew tribes, which, under the leadership of Joshua took possession of Canaan the Promised Land, after the death of Moses. In 930 BC the 10 tribes formed the independent Kingdom of Israel in the north and the 2 other tribes, Judah and Benjamin, set up the Kingdom of Judah in the south. Following the conquest of the northern kingdom by the Assyrians in 721 BC, the 10 tribes were gradually assimilated by other peoples and thus disappeared from history.

I had already decided on one theme, namely how the Church leader, Isaac Beaumont was obsessed by his ancestry so I took this story and wove it into the backstory of the Church. This extract is from the Testaments of Truths, the philosophical background to the Church as written by Isaac’s father, Joseph and updated by Isaac (you can find more of the Testaments at the back of MFOL).

“The Bible tells us of 12 children of Jacob, himself a direct descendant of Adam.
Those children formed 12 tribes of which ten were lost. Anthropologists tell us the
original human migration was from Africa and there is evidence of this dispersal
elsewhere in Africa, in China and Asia. But those tribes and their eventual homes
remain a mystery. It is my view that the Diaspora was God’s Plan all along, to spread
Man’s strengths, to let Man develop and then bring the tribes back together to create
stronger, healthier societies and strengthen the species to achieve God’s Highest
Purpose. This was God’s Plan for Man: to improve humanity. But it was a slow and
difficult path. Pollution and corruption are necessary consequences of close
proximity breeding so spreading out, growing stronger then re-mingling and
spreading again was one. The powers he gave us, the instinct to push, to look for
new pastures, to improve… they were all part of His Plan. We are to use every skill to get stronger, fitter and cleverer so we can survive longer.”

Isaac is determined to prove his father right. His mission to Nicaragua as a young man (which is central to the conundrum at the heart of the book) came about because Isaac wanted to study the dispersion of the Amerindian groups and show the links back to the original Jewish Diapsora. His (blinkered) enthusiasm to fund a genetics’ research facility at the Beaumont University is the result. What happens because of Isaac’s one eyed devotion to this idea is at the core of the story and the drama that unfolds.

While researching for this book I found that there are any number of people who are
convinced they have found and can trace those linkages back to those Ten Lost Tribes.

“In 2010, the Guardian reported that Israel was to fund a genetic study to test the veracity of a genetic link to the lost tribes of Israel. The article stated “Historical and anecdotal evidence strongly suggests a connection, but definitive scientific proof has never been found. Some leading Israeli anthropologists believe that, of all the many groups in the world who claim a connection to the 10 lost tribes, the Pashtuns, or Pathans, have the most compelling case.”

We are fascinated by finding out about our ancestry – the TV is full of programmes tracing someone’s family tree. Increasingly we are turning to DNA coding and genetic testing to show the links. We are becoming familiar with a strange language: Haplogroups – Y Chromosome DNA and mitochondrial DNA – used to determine genetic populations. Isaac is, in his own way, no different for many wanting to trace where they came from, the better to understand who they are today. And in so doing he, as do others, expose some of the lies we are told by our forebears or which we have misdirected ourselves into believing.

Lies. They are at the root of everything, especially a good book.

My Father and Other Liars is the second book by Geoff Le Pard. Published in August it is available as an ebook and paperback here:

His first book, Dead Flies and Sherry Trifle can be found here:

Geoff Le Pard started writing to entertain in 2006. He hasn’t left his keyboard since. When he’s not churning out novels he writes some maudlin self-indulgent poetry and blogs at geofflepard.com. He walks the dog for mutual inspiration and most of his best ideas come out of these strolls.