I found this on the beach last year. To me it looks like a porcelain dog’s head, weathered by its time in the sea but still holding a vestige of what it once was. And it is porcelain, not just some strangely weathered stone – traces of shining crackled glaze run under its ‘chin’ and the shape seems too regular to have been made by anything other than human hands. 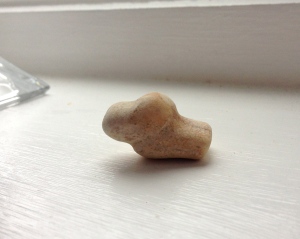 The beach where I found it is in South Wales at the mouth of a river. Tidal surges combined with a point make it perfect for surfing waves, one of the reasons we were there. A small town sits on the hillside above looking out across the silver sea, but there’s nothing at the river mouth now except green flatlands intersected with twining ribbons of water, then pebbly shingle as you get closer to where it meets the sea. But there was something once. Red bricks, weathered by the waves into undulating shapes, still overlaid in places by concrete aggregate, shattered and cracked by the power of the water, hint at a large structure here once, many years ago. And that’s where the story comes in.

This little piece of porcelain speaks to me of long distance voyages, creaking timber ships laden with treasure from lands steamy with tropical heat. Crowded ports ringing with voices, languages and customs in layers too heavy and convoluted to tell apart, a glorious mix of cultures and ideas. I imagine a journey south, stopping at spice-scented ports along the way, trading until the great horn of Africa is rounded and the long haul north begins. The ship with its cargo fetching up here only for a dish or vase to drop as it’s carried to shore, shattered porcelain pieces sinking below the waves, a journey ended just moments too soon. Or perhaps someone came home from the East (for this is Chinese porcelain, I can just feel it – a little snarling dog with cloud-like curling painted ears), leaving silks and gentle customs behind to return to the green mountains and cold waters of the north, bringing treasured possessions all this way only to drop something, a crate breaking or trunk popping open at the last moment.

So even though it’s just a little piece of broken china I found on a shore, it tells me stories that take me far out into the world. I love stuff like this, the energy they contain. There is a psychic talent, if you believe in such things, called psychometry, whereby someone can tell the history of an item simply by holding it, drawing impressions from the energy it holds. Perhaps story telling is another facet of this, drawing on experiences out in the world and tying them into a narrative. I don’t know where this came from, but I can dream and think and weave what I know with what I don’t, and there lies the story. I’ve said it before and I’ll say it again – stories are everywhere, if you care to look for them.

PS And for those of you who think this is a bit of old meerschaum pipe, or a funny looking stone, or something completely different, let me know! This is the story it told me – perhaps it will tell you something else xx