I was talking to my musician brother recently, about creative ideas and where they come from. I commented that sometimes, I didn’t realise where inspiration came from until long after the fact, when something or someone would jog my memory and I would make the connection. He said the same thing happened to him with his music, ideas coming from things he had seen or done without him realising straight away.

On my recent holiday I visited Hearst Castle, on the California Central Coast. I was last there about thirty years ago with family, and the visit we made to the castle is one of the standout memories of that trip. So to say I was looking forward to seeing it again is something of an understatement.

For those of you unfamiliar with Hearst Castle, it was built in the early twentieth century by a newspaper magnate named William Randolph Hearst. Originally intended as a holiday bungalow, the project, under the joint guidance of Hearst and his architect, Julia Morgan, grew into a main building, three guesthouses, a huge outdoor swimming pool featuring a real Roman temple, an indoor pool, extensive landscaped gardens and a zoo. Hearst was a great traveller, and during his frequent trips to Europe would buy antiquities and, on occasion, entire rooms from ancient buildings that were being demolished, sending them back to Morgan with instructions to ‘fit them in somewhere.’ Hearst lived at the castle with his mistress, the actress Marion Davies, and it became the place to be seen for Hollywood elite during the twenties, thirties and forties. So Hearst Castle is a fascinating and historically significant place to visit, not just for the architecture but also for the stories it holds.

I took quite a few photos while there and, when I posted some on Facebook, my cousin commented, ‘This is a bit like how Ambeth looks in my head.’

I don’t want to take away any of the mystery of my books, as Ambeth is inspired by many different places. However, the towered Palace surrounded by gardens does bear a slight resemblance to Hearst’s castle, set high on its hill overlooking the California coast. It wasn’t something I did on purpose – in fact, I was thinking more of Notre Dame when I was trying to describe the Palace – so it was an interesting realisation that a trip I took at fifteen was still resonating somewhere in my subconscious, helping to create a whole new world. 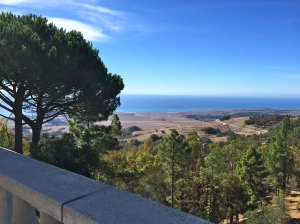 We are all the sum of our experiences, and that which we create reflects much of what we have done. However, you don’t need to travel to have a rich internal landscape – life experiences can happen in your own living room. It has been commented on many times that the Bronte sisters, despite their relatively sheltered existence, were able to write books of passion and emotion such as Wuthering Heights. I believe that true inspiration comes from somewhere beyond the confines of our existence, a process that can’t really be explained other than to say ‘it is.’

Still, it’s interesting to see connections like this. None of us create in a vacuum, after all.

19 thoughts on “The Landscape of the Mind”