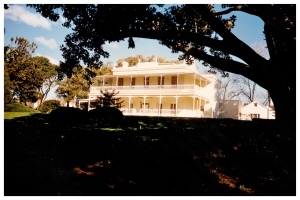 I’ve been watching Miss Fisher’s mysteries for a little while now. I used to live in Melbourne, so it’s nice to see the familiar streets and buildings such as Rippon Lea, The Manchester Building, Como House and Melbourne Town Hall. And the fashion! If I could have anyone’s television wardrobe it would be Miss Fisher’s – in fact, it’s become so celebrated that Vanity Fair wrote an interesting piece devoted to the secrets of her wardrobe – you can read it here.

The other thing I love about the show is seeing the characters come to life. I first discovered Kerry Greenwood’s Phryne Fisher books about fifteen years ago and was instantly hooked. I loved Greenwood’s stories of 1920’s Melbourne, of wealthy Phryne and her devil-may-care attitude as she solved mysteries and set the world to rights. When I heard it was going to be made into a series, I was thrilled. And, so far, it has not disappointed (other than the fact that the divine Lin Chung was relegated to a one-episode lover). Essie Davis is perfect casting as the elegant Phryne, as is Ashleigh Cummings as Dot, Hugo Johnstone-Burt as Constable Collins, and Nathan Page as Inspector Robinson.

Luna Park, Melbourne. The iconic park is in St Kilda, home to the fictional Phryne Fisher

I had a recent conversation in the comments section on one of my posts with Kristin, from Pursuit Of A New Adventure. Kristin has read both Oak and Mist and No Quarter (thanks Kristin!), and she was talking about how she pictured the characters in her head, naming one celebrity in particular as her image of Deryck. This was interesting and really, really cool. I loved hearing what she thought, as I have a clear picture in my own mind of each character and how they look. And of course I have considered the idea that one day, if my books ever took off, they could be televised or made into a movie. In fact, if I’m being really honest, I might have even spent a bit of time googling images of different actors, assembling my fantasy cast should it ever come to pass.

Well, that’s not embarrassing at all, sharing that with you 😀

But it’s true, and I bet I’m not the only one out there. I didn’t base any of my Ambeth characters on real people (except for one, who looks like a friend of mine). But as they’ve come to life in my mind it’s been an interesting process to try and marry their physical appearance with someone in the real world. For reference purposes, you understand 😉 And while I’ve not yet ‘cast’ every character, I have a pretty good idea of who I’d like to play most of them.

So many stars to choose from 😉

It would be fascinating to see my work interpreted by somebody else, which is why I so enjoyed Kristin’s comments. I wonder how Kerry Greenwood feels, seeing her creation on the small screen. I also wonder if the cast match her original vision of the characters as she saw them.

So how do you feel about the idea of seeing your characters onscreen? And do you have a fantasy cast list already? (go on, you can tell me)

17 thoughts on “Cast Of Characters”