Or Melbourne. Which is also far, far away from where I’m sitting, and where this (slightly embarassing) photo was taken, several years ago. 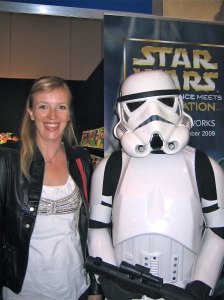 To be honest, it’s not the best photo of me, but then I never really like myself in photos. It is, however, testament to the fact that, even though the prequels were eye-bleedingly bad, my love for the original three Star Wars films never died. I saw them all in the cinema when I was a child, and can still remember the excitement and wonder of each new film.

The photo was taken at Melbourne Fantasy & Sci-Fi Con, the one and only time I’ve ever been to one of these events (though I think I’ll go again one day). It was a great day out, minor stars of film and TV wandering about, signing photos and giving talks. Twilight was big at the time, and there was a Volturi and a werewolf present, if I remember right. My friend and I wandered among the stalls, giggled our way through part of a Superman vs Batman cartoon (before realising that, to many people there, it was deadly serious) and took photos, including the one above.

So in the spirit of my Wednesday Wander, here is a photo of Melbourne as well, just along the river from where the Convention took place. But we will leave Melbourne for now. Leave its eucalypt-scented river walks, Victorian buildings, modern art and excellent coffee.

For today I am going to see The Force Awakens, and I have a cinema to get to, and a childhood fantasy to relive.

See you on the other side 🙂

18 thoughts on “Wednesday Wander – A Galaxy Far, Far Away”