As I’m sure you know, it was Valentine’s Day yesterday. Some of you may have pushed the boat out, others may not have marked the occasion at all. My husband and I tend to fall into the latter category – other than a spectacular surprise night out several years ago, complete with jazz, baby animals and a picnic, we don’t really do the ‘Valentine thing.’

Which is fine by me. There are 365 days in the year in which to say we love each other – to celebrate one as being more important than all the others isn’t really something I’m bothered about. However, to each their own.

So this year we had made no plans, as usual. Then the gorgeous girl was asked on a sleepover at her best friend’s house, and suddenly we found ourselves at a loose end. The weather was cold but sunny, so when husband suggested a drive out to Dunstable Downs, I was very keen.

I love the Downs. There is an energy there at once uplifting and relaxing, the ancient landscape holding the feel of old Britain, green countryside stretching for miles around. Other than a very nice visitor centre, there is nothing much up on the Downs, which is how it should be. The attraction is the view, the clear air, the gliders swooping like giant birds overhead, kites streaming in the fresh breeze.

It was bitterly cold when we got there, but the sun shone and I took several photos up there, as I usually like to do. When I looked at one photo I saw this:

I had taken two photos in quick succession of the same view, cold fingers fumbling a little. The orb is visible in both, though in the second shot it has moved a little. And, even though I took other photos pointing the same way, it’s only visible in these two. Trick of the light? Maybe. Probably. But then again… 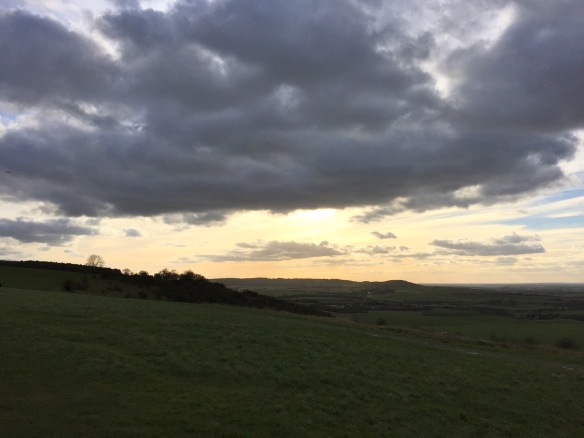 So. This was already a cool (actually, cold – it was freezing up there) start to our unplanned day out. Feeling hungry, we stopped in at a popular country pub on the way back, expecting it to be heaving with couples yet hoping we might get a table for two. And we did. Amazing! The food was lovely, the service excellent and we enjoyed the chance to sit and talk and eat uninterrupted. Then we realised there was a 5:15pm showing of Deadpool at the local cinema. It was 4:40pm. Forgoing dessert we asked for the bill and headed back into town, hoping we’d get in before the movie started (and that it wasn’t sold out).

It wasn’t. We made it with ten minutes to spare, managed to get two seats together and sat back, ready to be entertained. Husband isn’t as big an X-Men fan as I am, so he was a bit unsure. However, from the opening credits he was laughing, as was I and most of the other cinema patrons. Deadpool is excellent. Profane, funny, gory, romantic – we both enjoyed it immensely. It was probably the perfect Valentine’s Day movie for us.

Sometimes the best days are those with no plans at all.

20 thoughts on “Deadpool, the Orb and an Unplanned Day Out”