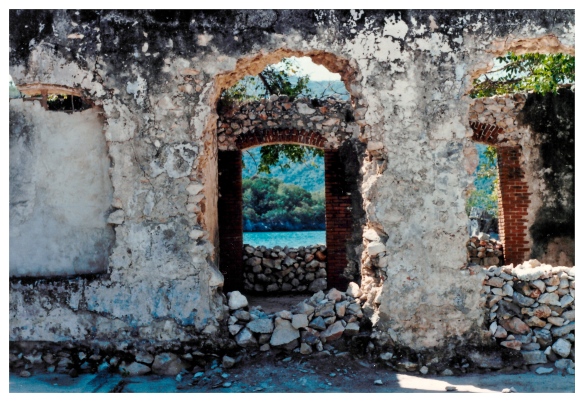 This is a photograph of a ruined brothel on the shores of a pristine bay in Haiti, which comprises the western half of the island of Hispaniola. I visited Haiti briefly nearly thirty years ago and, I have to be honest, had a fairly sanitised experience in my short time there. Nonetheless, I was struck by the beauty of the place, and the juxtaposition of an old brothel against modern scenes of happy beachgoers.

Haiti has a troubled history since European settlement. In the seventeenth and eighteenth centuries it was known for its lucrative sugar cane plantations worked by slaves, all of whom were horribly mistreated. An uprising in 1791 ousted the colonial masters and brought an end to their cruel practices, making Haiti the only nation in the world established  as a result of a successful slave revolt.

In recent years Haiti has suffered from political turmoil and the devastating earthquake of 2010, in which much of the country’s infrastructure was damaged or destroyed. This combined with ineffective government and a subsequent cholera outbreak has meant that the country is still struggling to recover. And yet it remains a place of outstanding natural beauty, with many of its historical landmarks still intact, including those that predate European settlement. To see more photographs of Haiti as it is today, this excellent article by National Geographic features photographs of Haiti by Haitians, as well as their stories.

Thank you for coming with me on another Wednesday Wander – see you all next time!