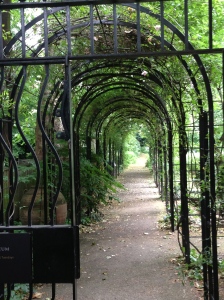 It’s Monday. The start of another week. Thanks for stating the obvious, you might be thinking. But as I wandered along on my morning walk back from school, I pondered the idea of beginnings. Starting something – taking the first step, as it were – is often the most difficult part of any journey. Think about it. Walking into a new job or school. Starting a new sport. Beginning a diet. Making change in your life. Whatever the first step may be, it involves conscious choice and a will to proceed. It also can require courage, especially if you’re doing something you’ve never tried before.

I have a friend who is thinking of writing a book and she recently emailed me, saying she didn’t know where to start. This can be the hardest part about writing, I think. Starting. Sitting down and typing that first sentence, the pathway that leads you into the story. There are so many wonderful examples – Daphne Du Maurier’s Rebecca ‘Last night I dreamt I went to Manderley again‘ and Jane Austen’ It is a truth universally acknowledged that a single man, in possession of a good fortune, must be in want of a wife‘ are two that come to mind straight away. And there are so many awful ones as well – there are even competitions to see who can come up with the absolute worst opening to a novel. The Edward Bulwer-Lytton Fiction Contest is one to look at if you’re interested, named for the man who came up with the immortal ‘It was a dark and stormy night.’

I’d already been writing for many years when I decided to sit down and start the first draft of Oak and Mist. I remember clearly that it took me a while to get my head around the idea of writing a book. An actual book. I didn’t know whether I could do it, whether it would be any good, or whether I even had a complete story to tell. All I had was a starting point, three characters, and an idea of how they might work together.

My first draft ended up being a monster of over 160,000 words. I managed through successive edits to whittle it down to below 140,000, which I then split into two halves, Oak and Mist and No Quarter. But the cool thing, the thing that really kept me going, is that the story itself didn’t change, nor did the characters – it was the language and structure that needed work. I rewrote and changed the first three chapters so many times I lost count, before finally condensing them into a few short pages. But the beginning incident, the idea that started the whole journey, never changed.

So the important thing with any sort of journey is to start. As you can see, it took time for me to actually sit down and choose to write a book. Then it took even more time to get the beginning of the book the way I wanted it to read. But it didn’t stop me from writing, from continuing on with the story until it was told. For you can always go back. Until the work is published, there is always room to make changes. So don’t let fear hold you back. The story is there, waiting to be told. The journey, there to be taken. All you need to do is take the first step.

(This is an edited and amended version of a post first published in July 2014, when hardly anyone came to visit my blog. Thank you for coming to visit today)

PS I’ve been nominated in the Bloggers Bash Blogging Awards as Best Pal – yay! If you’d like to vote for me, (or even if you wouldn’t), head on over to Sacha’s blog and make your vote count!

34 thoughts on “Take The First Step”