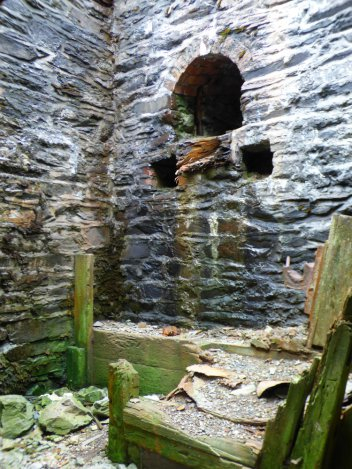 Sue’s chosen another great shot for her #writephoto challenge this week, and here’s my take on ‘Mine’:

‘Funny place for three holes. D’you think that’s where they hung the prisoners?’ His voice echoed up through the topless tower as though we were at the bottom of a well. I tilted my head, wanting to show him how much I knew about this stuff. Still not quite at ease with him, our relationship something new.

‘Well,’ I said, ‘the big hole – there could have been something there. Like a display of weapons, or something. The two smaller holes, I don’t know-‘

I felt his hand push hard on my shoulder, then he was up on the old wooden platform, the timber creaking alarmingly under his weight as he made his way, sure-footed, to the holes. He turned, winking at me, whisky brown eyes crinkling.

‘Only one way to find out,’ he said. Then he placed both hands inside the smaller holes, putting his face up against the larger one.

Then he jerked, screaming. I screamed too, the sound sending pigeons flying up, flap of wings against ancient stone. I scrambled to get on the platform, my hiking boot catching on the edge, banging my knee in my haste to get to him.

Then he started laughing.

‘Ass!’ I laughed, too, though more out of relief than anything else, sitting back and rubbing my knee. He jumped down, still chuckling.

‘Come on.’ He held out his hand. I took it, feeling that connection, the electricity I got from him and no-one else. He pulled me to my feet, then into his arms.

‘Sorry, I didn’t mean to scare you.’ Then he kissed me, and I knew.

For more entries, or to add one of your own, head on over to Sue’s blog 🙂