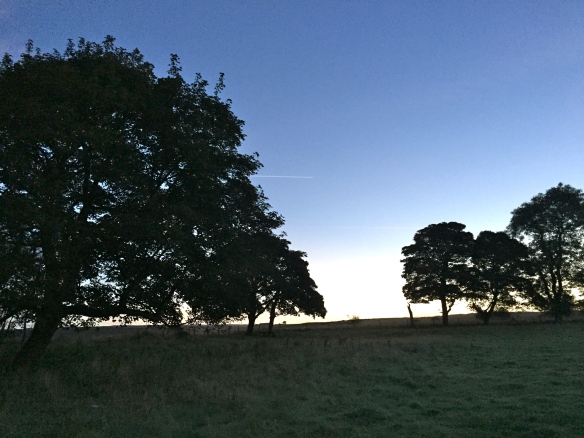 This is the continued account of my weekend away with The Silent Eye. Click here for parts one, two, three, four and five.

Ugh. I hadn’t slept well, and my alarm jolted me out of a dream. Yet, once I’d woken fully, I was excited. This morning we were heading up into the hills to chase the sunrise. I wouldn’t have missed it, no matter how tired I was. I showered and dressed quickly, managing to gulp a few mouthfuls of tea before heading down to the deserted hotel lobby. There was a small moment of panic when I thought I was locked in, but I emerged eventually onto the still-dark street, a pale glow of light in the sky heralding the coming dawn.

We were to meet the rest of the group in the Fox House car park – my companion and I were the first ones there, so I wandered off to take some photos of the view, trees silhouetted against the pastel-hued sky. The air was cool and still, and I was glad of my extra sweatshirt and wool hat against the pre-dawn chill.

Then we were off, taking the winding road higher and higher until we reached a small parking area. Leaving the cars we climbed higher still, up stone stairs to where an ancient hillfort crowned the peak, views in every direction. The stones were large, in some cases huge, carved and shaped and most definitely placed there. But by whom, exactly, is lost in time.

We gathered as a group to watch the sun make its appearance over the far ridge, golden light moving across the valley floor, pushing mist ahead of it. The group chose to greet the sun in their own way – I stood to one side, for some reason feeling the need to be alone.

…it seemed that her path lay through solitude. Companions there would be, but in the end, she had to choose her own way, be true to her own self. So she faced the dawn apart, but not alone, sending a greeting from a place deep within…

Once the sun was above the ridge we were free to explore, wandering along sandy pathways studded with tiny pieces of white crystal. I walked among the stones, listening to the morning sing and watching mist rise like dragon’s breath from distant Carl Wark, where the weekend’s journey had begun.

…as she walked the peak to the sunrise, all at once it was as though she stood on a pathway of stars, the heavens above reflected below, and she a dancing figure poised in between. The feel of something older, something beyond…

As the light grew brighter, I amused myself by taking shots of my shadow against the golden-lit rocks. We weren’t the only ones up there, a few photographers taking advantage of the clear morning and glorious views.

I took several photos of the small depressions carved into many of the rocks, their reflections like a path of stepping stones towards the sun. One particularly large rock formation had taken my attention and I turned to Sue.

‘Those stones…’ I began.

…a piled stone figure, lion messenger of the people who were once here. It reminded her of ancient doorways an ocean away, of stone figures left on mountainous shores, marks of the peoples who lived there. It was both welcome and warning, that here she stood on ancient land…

We continued to wander the hilltop a while longer, but it was getting cold and breakfast was beckoning. The decision was made to descend, arrangements made to meet up later for our final trip to the stone circle at Arbor Low. The golden sunrise promised a fine day ahead…

20 thoughts on “Circles Beyond Time – Dawn”