I had a very productive writing day today. The kidlet went back to school and (even though I missed her) I managed to clear a bit of clutter out of my office, plus take a walk in the freezing cold sunshine. And it seemed to pay off. A nagging structural issue in Under Stone (Ambeth book four) that had been plaguing me for the past two months was finally resolved. Plus I managed to catch up on a few other bits and pieces, which was nice.

I wanted to write a blog post as well and, as it’s Thursday, thought I might post a Thursday Door. It’s been a little while since I’ve done so, though I did have a few door photos hanging around – I think the blogging challenge I did last month threw me a little bit off course.

Anyway, I digress. Here is my door:

It’s a rather nice church door, isn’t it? And here is the church:

As you can see, it’s missing a few components like a roof, an aisle and any sort of interior. This is St Dunstan of The East, a Norman church in the heart of old London. Built around 1100, the church was damaged in the Great Fire of 1666, after which a tower and steeple designed by Christopher Wren was added. However, when the Church was badly damaged during the WWII Blitz, it was decided not to rebuild and, in 1970, it was opened as a public park. 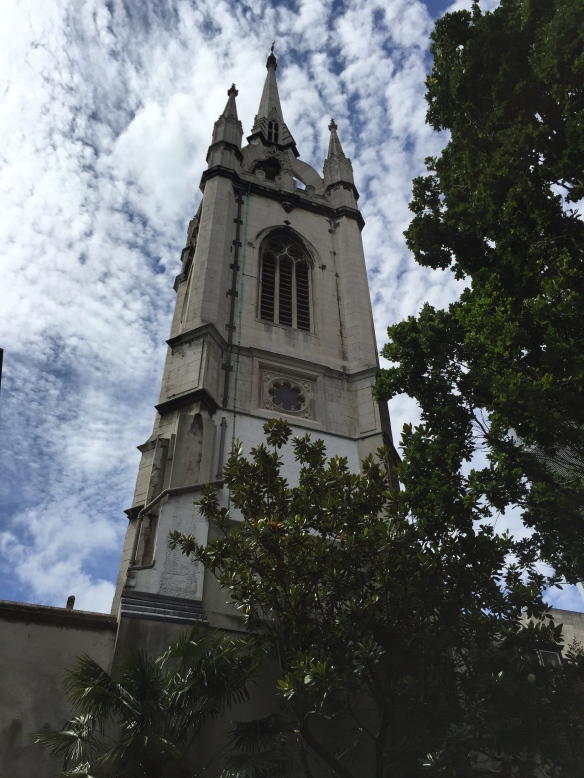 It’s a tiny park, as parks go – about the size of the ground floor of an office block. But it is a magical space, twined with ivy, glassless windows looking out onto modern London, an oasis of calm seemingly out of time.

This was my response to the Thursday Doors Challenge, courtesy of Norm 2.0. For more doors, or to add one of your own, head over to Norm’s site and click the link.

29 thoughts on “A Productive Day and A #ThursdayDoor”