For this week’s Wander I’m visiting one of the most recognisable structures in the world – Italy’s famous leaning Tower Of Pisa.

When I took the photos out of the album I noticed I’d written ‘everything leans!’ next to the images, and I do remember that being true. The Cathedral and Baptistry were also slightly off-kilter, though it is the tower that demonstrates the most profound lean.

However, it did continue to tilt, and the top is now nearly four metres out of alignment. When I visited, access to the tower was closed off, as it was felt that the tourists tramping up and down it, year after year, had contributed to further lean. That didn’t stop a couple of enterprising young men from coming up to us and telling us they had the keys to the tower if we wanted to go up – no doubt a line, but very entertaining nonetheless! The tower has since been stabilised and re-opened, so perhaps I’ll get to go up one day. 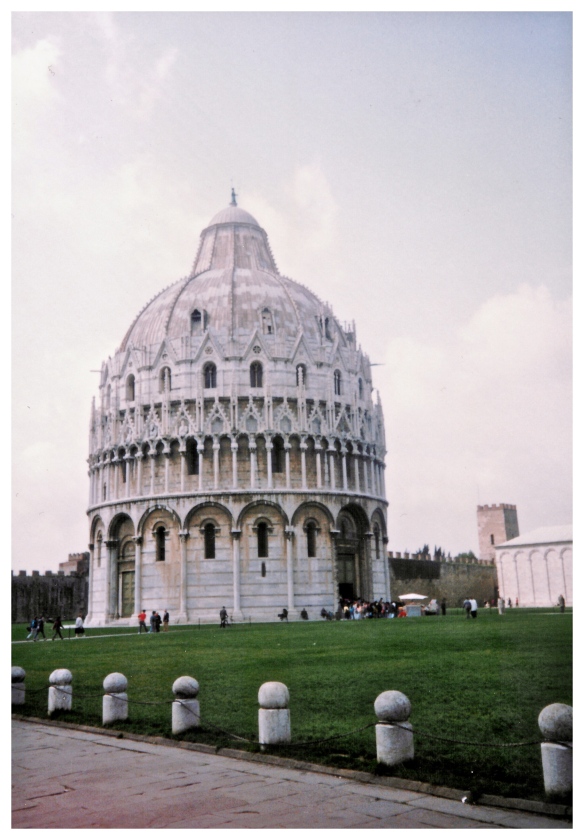 The tower has had an interesting history in its long life, including unsubstantiated stories of Galileo conducting experiments in speed and mass by dropping cannonballs from the top of the tower, and it being used as an observation tower by the German forces during WWII. In fact, it was almost targeted in an artillery strike by Allied Forces – only the beauty of the site kept it from being destroyed. Thank goodness for that!

Thanks for coming on another Wednesday Wander with me – see you next time.