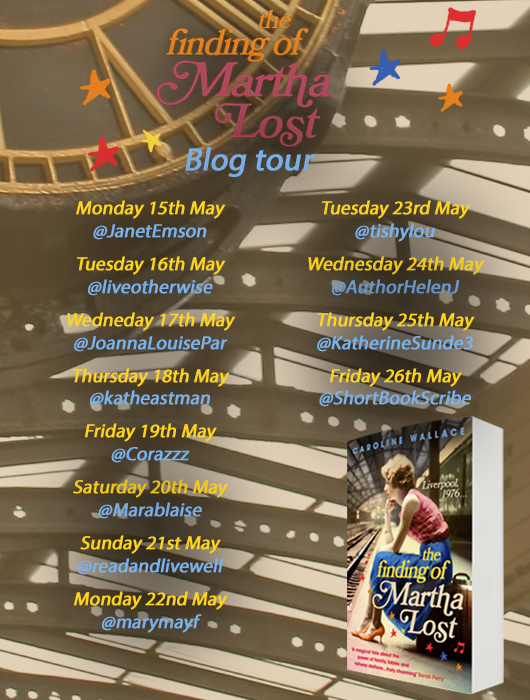 She’s been lost since she was a baby, abandoned in a suitcase on the train from Paris. Ever since, she’s waited in station lost property for someone to claim her. It’s been sixteen years, but she’s still hopeful.

In the meantime, there are mysteries to solve: secret tunnels under the station, a suitcase that may have belonged to the Beatles, the roman soldier who appears at the same time every day with his packed lunch. Not to mention the stuffed monkey that someone keeps misplacing.

But there is one mystery Martha cannot solve. And now the authorities have found out about the girl in lost property. Time is running out – if Martha can’t discover who she really is, she will lose everything…”

Welcome to the charming, quirky world of Martha Lost. A world of lost things, including Martha, set within the confines of Liverpool’s Lime Street Station.

It’s the summer of 1976 and teenage Martha has been at the station since she was a baby, abandoned in the lost property office where she was taken in by the proprietor, the rather unpleasant Mother. Her life is bounded by the station, for, like a modern day Lady of Shalott, she’s been told that if she ever sets foot outside the station it will collapse into the earth, destroying it utterly.

So Martha lives her life under the glass atrium, twirling across the platforms and concourse, interacting with the other residents, some obvious, some not so much. Until a series of events forces her into finding out the secrets of her lost past.

The Finding of Martha Lost is a sweet dream of a book, all cakes and characters and the innocence of youth. Yet there are threads of darkness in Martha’s world. Abuse, loss, death and shame twine with the lighter themes of her story to add a touch of gritty realness and, when the real world intrudes into her life with the arrival of an Australian adventurer carrying a mythical lost case of Beatles memorabilia, events build to breaking point and Martha finds she is no longer lost.

This is a book about the families we build, rather than the ones we are born into, and of how damaged souls can help each other to heal. Martha Lost combines whimsical storytelling with real events and a touch of magic to create a tale that lingers with the reader long after the last page is turned.

I received my copy of Finding Martha Lost through NetGalley. All reviews and opinions are my own.