I recently attended a workshop, with The Silent Eye, about Facing Our Fears, an extraordinary weekend spent among the hills and grey stone villages of the Peak District. It’s taken me a little while, as it usually does, to process everything that happened. Once again there was history and mystery, good company and tasty food, old friends greeted and new friends made. And, as always, revelations.This is part three of my account, parts one and two can be found here… 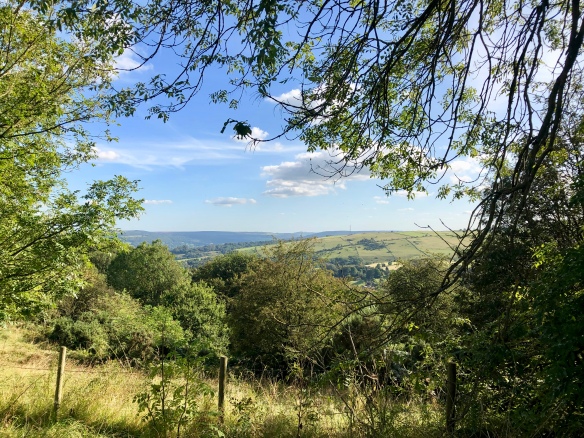 We travelled through Eyam, the road taking us higher and higher, the valley opening away to our right. And as we did so the air began to clear, the strange weight that had burdened me lifting. We continued along a narrow track edged with tangled brambles and tall nettle, a fairy-tale barrier between us and the view. Taking a fork in the road among tall trees, Sue pulled the car onto the narrow verge to park.

And all was still.

The day remained bright, the sky a curving dome of blue, the air fresh and clear. We stood on a curving path bounded by a moss-covered wall, a rolling green hillside to our left. And, upon the green, a small enclosure waited. It was what we had come to see. The Riley graves. 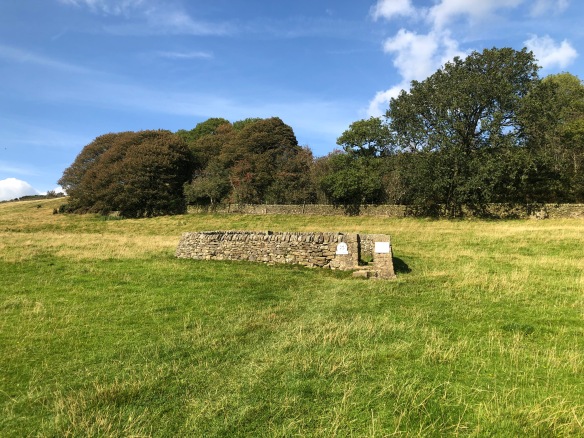 Once again, Sue has written an excellent detailed account of what happened on the ridge, but the short version is this: As plague raged through the village in the valley below, two families, living separately on the ridge, hoped, perhaps, that distance would keep them and their children safe. However, it was not to be, with first one family, then the other, succumbing. But the cruellest blow was to Elisabeth Hancock, who, between August 3rd and 10th, lost her six children and her husband to the terrible virus. Isolated as she was on the high ridge, the neighbouring family having already succumbed to plague, it was left to her to bury her babies and spouse, one by one, carrying their bodies across to the shallow graves she’d dug, wondering, perhaps, when the disease would take her as well. I cannot imagine her pain, and, after what I’d experienced in the village, it was with some trepidation that I initially approached the small group of graves. 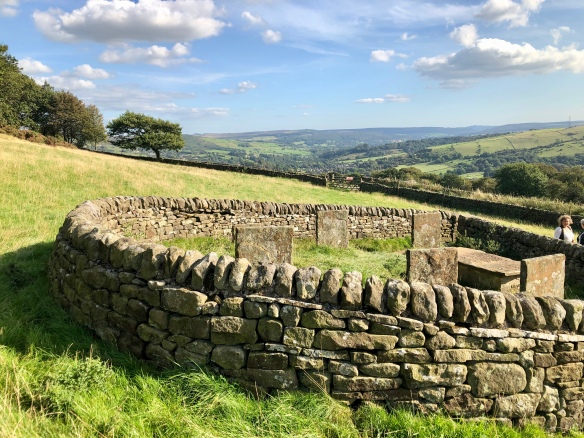 Elisabeth chose her spot well, with beautiful views across the valley and opposing hillsides. It broke the heart to imagine her doing so, that those she loved most might rest in a place where the air was fresh, the land they loved holding them like a precious jewel in a perfect setting. And, surprisingly, there was no heaviness here, no miasma of sorrow to weigh me down, no troubling visions. Instead, the overwhelming sense at these poignant graves was one of love. 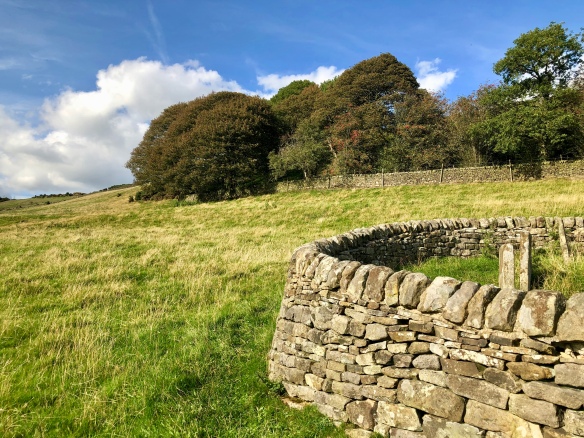 That said, I did not enter the enclosure, preferring instead to pay my respects outside the curving stone wall. I stood there for a little while, listening to the wind through the trees and grass, watching birds circle above, and tried to imagine how it must have been during those desperate days when Elisabeth lost everyone and everything she loved, including her home. 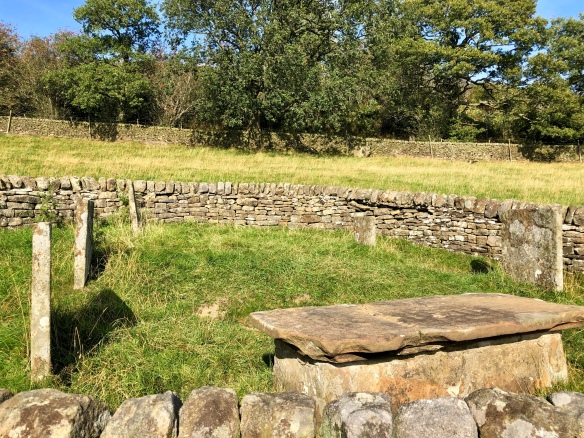 She must have been quite an extraordinary person for, when plague didn’t take her, rather than falling into darkness and despair, she instead went down to the village to help others who suffered. And when it was all done she was reunited with her remaining son, who was working in a nearby village and so had been separated from her for the duration of the quarantine. It was he who erected the memorial stones for his father and siblings, and perhaps, also, as tribute to his mother and all she had gone through those terrible nights alone.

The only sorrow I felt in this place was as we were leaving, when it hit me like a wave. We walked along the track, back to the cars, and it struck me how it must have been for her when she had to leave this place for the last time, leave the views and clear air and circling birds, the land she had worked and which now held the remains of all she held dear. For, while she was there, she was still with them. 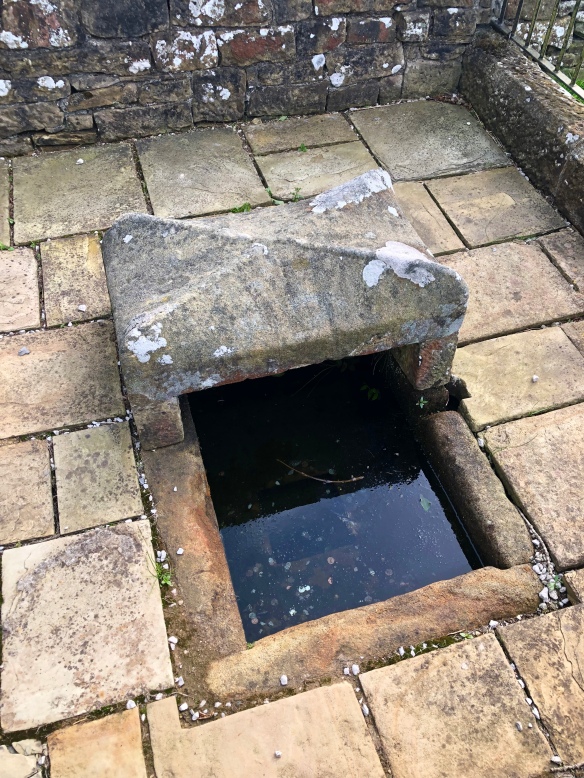 A short drive later and we were at our second-last stop for the day: Mompesson’s well. This was one of several wells marking the boundary of the village, where food and money were left for and by the villagers during their quarantine. It was a gloomy place, despite the brightness of the day, and the heavy fencing around it didn’t do much to lift the atmosphere. I think we were all still somewhat weighed down by the events of the afternoon. 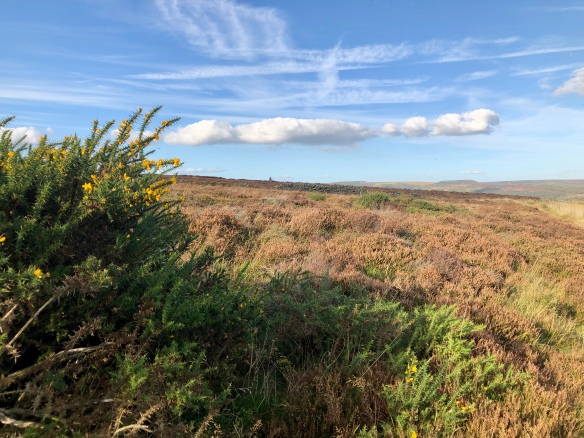 Luckily, our final stop was on the open moors, a patch of green grass the perfect spot to sit and go over the events of the day. I wandered off alone for a little while, opening my arms and heart to the sky and heather, letting the wind wash through me. It was the perfect antidote to a very strange afternoon and, by the time I got back to the hotel, I was feeling almost myself again. We were due to have dinner at a nearby pub, and I was looking forward to it. Tomorrow was going to be a very busy day, and I needed to recharge… 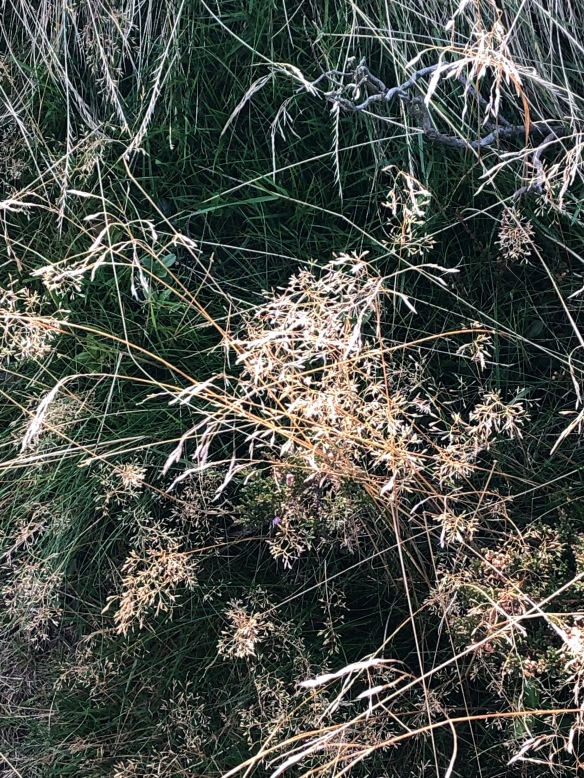 52 thoughts on “Facing Fear With The Silent Eye, Part 3 – Sorrow”