Skip to primary content
I forgot. Again. Heat is melting my brain, I guess? I have over 100 Wednesday Wanders just waiting to be reposed, but I keep forgetting. So here we are, Thursday and wanderless. However, in honour of it being such a stinking hot day here (30 degrees and humid), I’ve decided to post, not exactly a wander, but instead a memory of a cool valley replete with green grass, snowy mountains and a waterfall. Oh, and apparently it was the original inspiration for Rivendell, Tolkien being inspired by its beauty when he visited over a century ago. Enjoy… 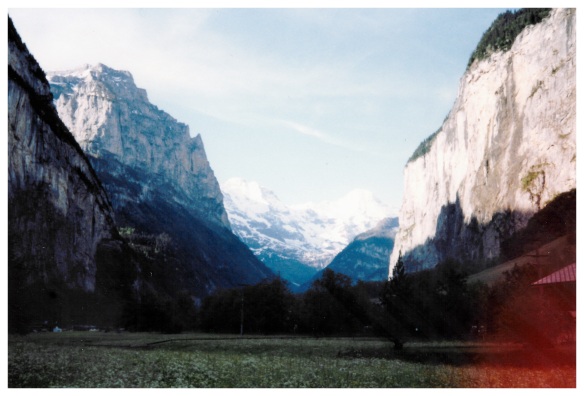 This was the view from my chalet. Pretty nice, hey?

About twenty-five years ago, I went on a trip around Europe. I was living in Canada at the time and this was my first big holiday by myself, so it was a Big Deal. The trip brought its own set of challenges and experiences, most of them positive, as well as some marvellous memories.

One of the places I visited was the valley of Lauterbrunnen, Switzerland. I stayed there for a couple of nights, lulled to sleep by the sounds of the nearby waterfall and the gentle chime of cowbells. It was an extraordinarily beautiful place, and I felt the spectacular landscape had a fairy-tale quality quite unlike anywhere else I’d been before. While I was there, I also took the cog railway up to the top of the Jungfrau mountain, taking photographs of the scenery along the way. 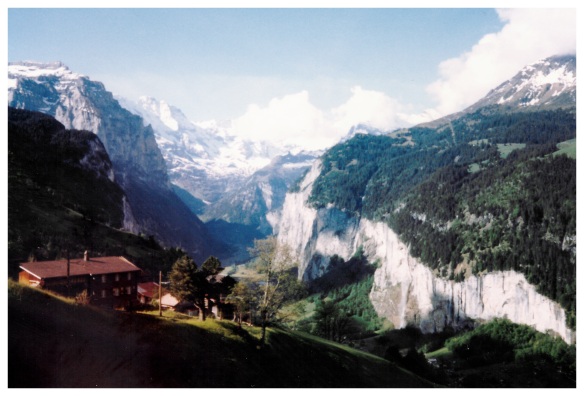 What I didn’t know at the time was that J.R.R Tolkien had visited the same valley in 1911, and was so taken by its beauty that he used it as the basis for Rivendell, home to Elrond and the Elves. (Apparently, on the same trip, he also picked up an illustration that inspired his description of Gandalf.) If you look at Tolkien’s painting of Rivendell (which I don’t have permission to reproduce here, so here’s a link), you can see the similarities between his fantasy world and the real one. 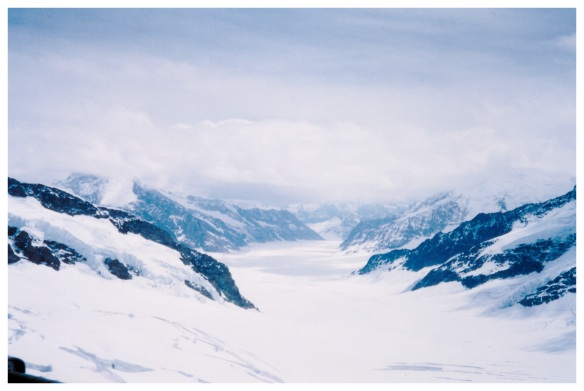 The glacier on top of the Jungfrau – the original Pass of Carahdras?

I recently wrote a post about the landscape that had inspired my own book, Oak and Mist. Though not quite as striking as the Lauterbrunnen valley and its towering mountains, the park near my childhood home holds both beauty and memory for me, making it the perfect starting point for my story. And this is one of the things I love about writing fantasy – blending the real world with the one I create. 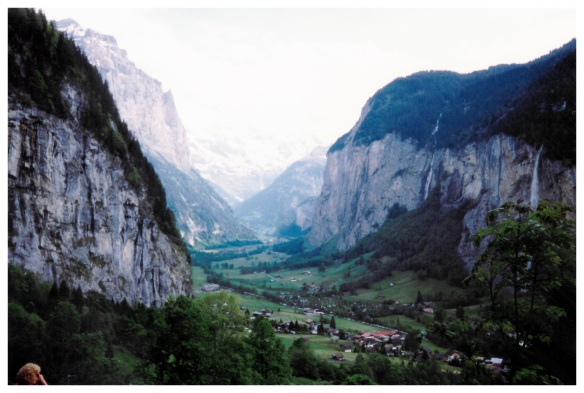 The valley seen from the lower slopes of the Jungfrau – look familiar?

I know you can visit Hobbiton and some of the other locations for the LOTR movies in New Zealand, and that they are spectacular. However, to walk through the actual landscape that inspired Tolkien to create Middle-Earth is quite something as well (even if I didn’t realise it at the time) 🙂

So how about you? Has your work been inspired by real places you’ve visited or lived in? Or have you walked in the footsteps of your literary heroes?

17 thoughts on “Walking Through Rivendell (Revisited)”