Yes, I am still doing the 30 Day Blog Challenge, but it’s Wednesday, and I always go for a Wander on Wednesday. Today’s prompt was: Very Loud. I thought about places I’d been that were loud – rock festivals, waterfalls, train stations, airports. Then the phrase ‘louder than bombs’ came into my head, and I knew where I wanted to wander.

So this week we are heading to a place I know fairly well. This is the ruined cathedral of St Michael, in Coventry, England. 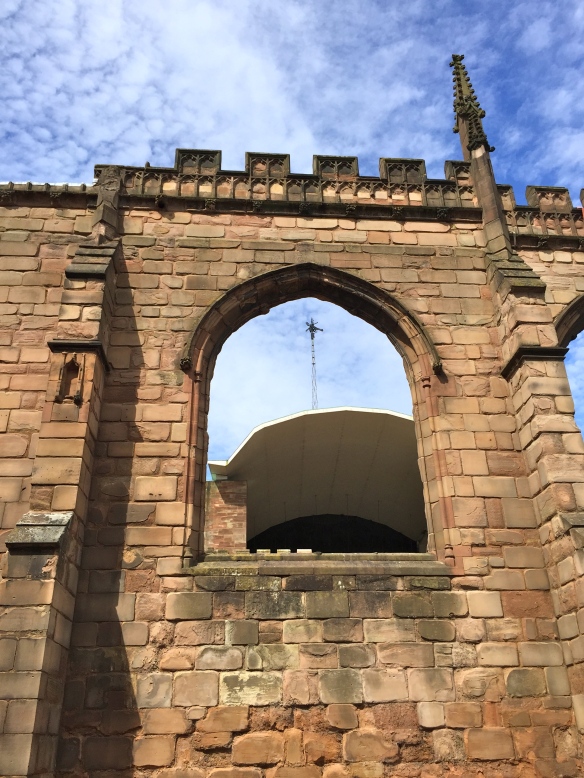 Built in the late 14th/early 15th century, St Michael’s was the largest parish church in England until 1918, when it was elevated to cathedral status. However, on the evening of November 14, 1940, the city centre of Coventry was almost destroyed by a ferocious bombing campaign, courtesy of the Luftwaffe. One of the casualties was the cathedral, a direct hit burning the roof and interior away, leaving only the walls standing. 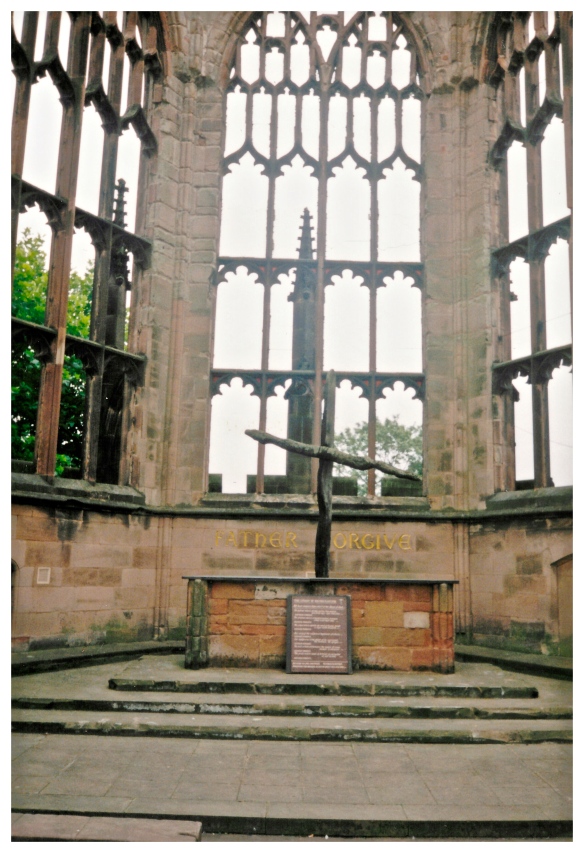 On the day after the destruction of the cathedral, the cathedral stonemason, Jock Forbes, found two charred roof beams lying in the shape of a cross. He tied them together, and they were placed on the altar. The provost, Richard Howard, had the words ‘Father Forgive’ engraved into the wall behind. Howard was also responsible for the Cross of Nails, made from two of the medieval roof truss nails – there are now 160 such crosses made from the roof nails across the world, including one donated to Kaiser Wilhelm Memorial Church in Berlin. Like St Michael’s, it was also destroyed in a bombing raid, the ruins of the old building preserved next to the new.

In 1950 a competition was announced to design a new cathedral. The winning design was by Basil Spence (later Sir), who insisted that the ruins of the old cathedral be preserved as a garden of remembrance, joined to the new building. Nowadays it is a popular place with visitors, and has appeared in several movies, including Nativity. It still remains hallowed ground. Recent excavations have uncovered a crypt, as well as exposing burned timbers – when I was there recently you could still smell the ash, an eerie reminder of a night seventy-six years ago.

Death has now taken many of the survivors of the war, their voices silenced, one by one. So the charred cross and simple message of the cathedral are powerful reminders of a night when bombs fell, yet spirit remained. Louder than bombs, indeed.