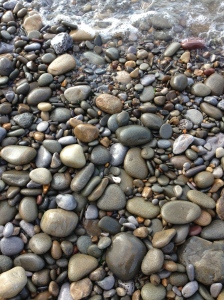 So tomorrow I’m going to have a day where I do nothing in particular. I like to do this once in a while, usually during school holidays, as the morning rush of uniforms and breakfast and walking to school interferes somewhat with the idea of having absolutely nothing planned. Just to be clear, I’m not planning on doing nothing – it is rather, an absence of planning altogether. Other than the fact I will wake, I will eat at some point and I will breathe, the rest of the day is wide open. Of course, being a parent, there are certain things I need to do, but I’m lucky in that I have a very relaxed child who is happy to lose herself in a craft project for a few hours, make up dances, practice handstands in the garden until they’re absolutely perfect or just sit on the couch with me and watch 17 episodes of Gilmore Girls, if that’s what the day brings.

I meditate most days, and find that there is a point, once all the swirling thoughts and ideas finally calm down, when there is nothing. Nothing but breath and darkness. But not a sinister darkness, instead one like that which precedes the dawn, a breath taken in about to be exhaled, ripe with possibility. It is a wonderful feeling and, I think, is the point when we as humans can touch on something much larger, commune with inspiration. It is a space where anything can happen. And that is what I’m trying to achieve, on a broader scale, with my day full of ‘nothing.’

Someone, I’m not sure who, described this idea of taking time out as ‘the space between the music notes,’ which I think is a wonderful analogy*. Imagine listening to a song and the notes are so jumbled and close together that it’s hard to discern the tempo or melody, just an endless cacophony. Then you add spaces, pauses between the notes, long, short or somewhere in between, and all at once the melody becomes evident. It can be this way with life. We can become too caught up in the idea of having to be doing something at all times, not wasting any part of our day, planning and doing and moving about to the point where we lose sight of the bigger picture, the days moving past filled with this and that until we wonder ‘Where did this year go?’ I realise I’m lucky to be able to take a day without having to schedule anything, but surely it isn’t that hard to do, that we can’t all find one single day when we can just let go.

As a writer, I find that setting myself goals (ie, I must write x amount of words in x amount of time) is a great way to get writer’s block. Instead I’ve found I need to just stop and think, go for a walk away from the work and let the idea coalesce so it can flow without pressure (and I’ve never missed a deadline so far). I’ve signed up to do NaNoWriMo next month and I do have a novel waiting in my head, bopping and burbling about, demanding to be released onto the page. Whether there’s 50,000 words worth of novel in there remains to be seen, but getting ready to set it free is part of why I’m taking this brief pause, walking away from the idea of writing for a day so the idea has space to grow.

So that’s what my day of nothing is about. It’s about taking a step back and just being. Letting the day unfold. Seeing what it brings instead of trying to control it. Creating space between the notes, so I can hear the melody once more. Showing the gorgeous child that it’s OK, sometimes, not to have a plan. To listen instead to the melody, and let it take you where it will.