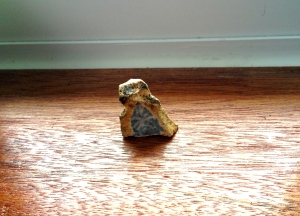 I found this flint some time ago. Split open, it lay upon the path where I walked.

It looks as though a star is inside it, as though long ago one fell to earth and became caught in the stone.

In Ambeth, the Elders of the Light watch the stars and see what they portend. They call it the skylore, the movement and patterns made in the sky letting them know what has been and what will be. It’s how they knew that Alma would be coming to them, that she would be the one to help them.

I live in an ancient landscape but then, I suppose anywhere in the UK could be defined as such. There are old traditions of watching the stars, ancient monuments aligned with the sun as it moves through the seasons. And this is not confined to the UK alone. Several years ago, an amazing star disk dating back to around 1600BC was found in Germany. Called the Nebra Sky Disc, it is made of bronze and gold and depicts the sun, moon and stars (including a cluster identified as the Pleiades), as well as two golden arcs for the solstices. It’s an extraordinary thing, the metals of its construction coming from as far away as Cornwall, hinting that the world, over three millennia ago, was a much more complex place than perhaps we imagine. 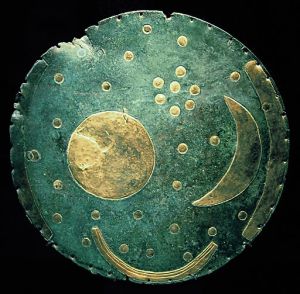 So I like to think of my little flint as a piece of a star. And I can hold it and link myself back to those ancients who watched the skies.

4 thoughts on “A Piece of Sky”