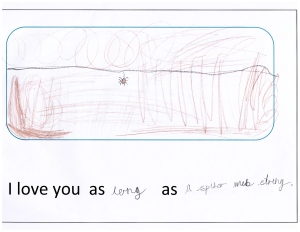 I love you as long as a spider web string

My daughter and I were looking through some of her old school work and we found this picture. It’s part of a book she did called ‘I Love You’, and the kids were given the words ‘I love you as,’ then a space, then the word ‘as,’ then another space. It was up to them to fill in the spaces, then draw a picture above of the simile they’d made. The book was only five pages long but each page tugged at my heart, a lovely memory to treasure.

Now, I would like to clarify that I’m not really a fan of spiders. They have too many legs and move far too quickly for my liking, and several harrowing encounters with very large specimens when we lived in Australia simply cemented my dislike. I know they’re very useful and industrious creatures, spinning their silken webs to catch flies and mosquitos and other pests in the home, but I still don’t want them too close to me. However, I loved this picture and the idea behind it, plus I also thought it was a lovely simile.

This then made me consider the use of simile when I write (bear with me, I’m going somewhere with this, I promise!). I tend not to use a lot of simile when writing because I feel they can often stray into the realm of cliche, as well as take the reader out of the story if poorly chosen. I think, like some spices, they are often best used sparingly, just enough to add flavour and nuance to the story. However, they can also be the easiest and best way to convey to the reader what you’re thinking – the key is coming up with something that’s different enough to what has been written before. It’s a bit of a brain stretch and the tendency in mid flow can be to just chuck in the first thing that comes to mind and fix it up later – at least it is for me. So I loved reading this book. Each page felt fresh, the ideas coming from a child unfettered by deadlines or weight of prior knowledge – instead, just free to think about how she loves someone and how best to express it. So next time I’m searching for the perfect way to describe how a character looks or feels, perhaps I’ll ask her instead.

PS. As I was writing this, the gorgeous child and I were horrified to see a huge, beautiful tree across the road from us being dismantled branch by branch and removed. It was in our neighbour’s garden and part of the view from my study (spare room) window. I loved to watch it, the way it moved with the wind, the sunset through the branches as it changed with the seasons, magpies chattering and roosting among the leaves. But now it’s gone. I don’t know why – maybe it was diseased, maybe it was dropping branches, maybe they were just tired of looking at it. But there is a hole now in the sky, and a sadness at its loss. My daughter sang as it went, both of us unable to watch as the final limbs were lopped and removed. I know it’s only a tree, but it made us both feel a little strange, watching it go.