For this week’s Wednesday Wander, I’m travelling through space and time to a temple I visited the first time I went to Bali, sixteen years ago.We had arranged a driver while there and one day, when we told him we’d like to see a temple, he suggested that, rather than see one of the more popular tourist temples, he could take us to the one near his village.

Before entering the temple, we were given cloth sashes to wear around our waists, plus my husband had to put on my sarong so his legs were covered (luckily I was already wearing a long skirt). 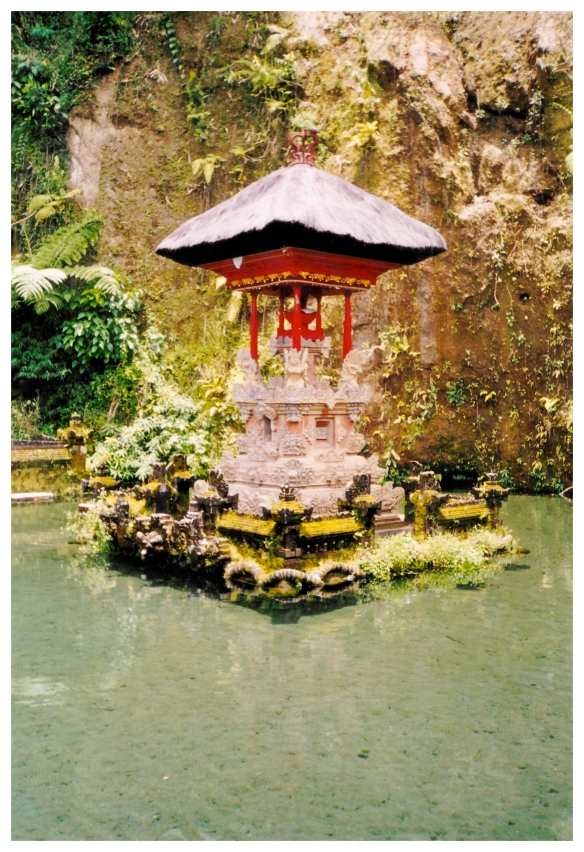 The temple was built to honour a sacred spring – you can just see the small dark opening at the base of the rock wall where it comes out. This shrine is in the middle of a fenced enclosure where no-one is permitted and, as you can see, the water is crystal clear. 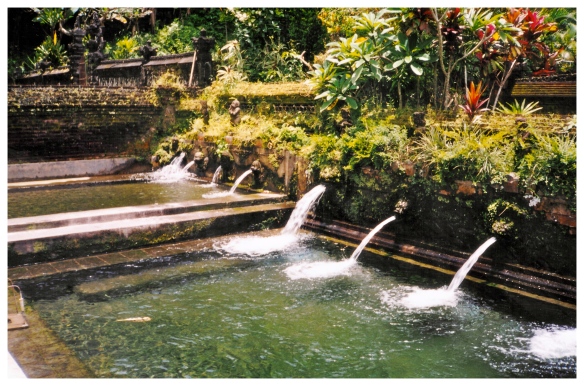 But the really cool part was that the water was then channelled from the enclosure into two separate bathing pools, one for men and one for women (this is the women’s pool, above). From these pools, the water ran out to the river, where people washed their clothes. So in many ways the spring was venerated for its usefulness, thanks for a gift of water.

Our driver then took us down through the nearby monkey forest to where the older parts of the temple were, including several pools no longer in use. The monkeys were tame enough that you could feed them with ripe banana, if you wanted, but did not approach us otherwise. The river snaked through into a vine-hung gorge where a stone bridge shaped like a dragon marked the crossing – the whole thing had a bit of an Indiana Jones feel. 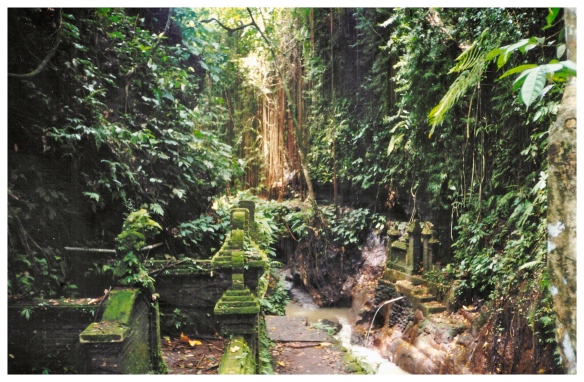 Bali back then felt still a bit wild, not quite so touristy as it is now (though not the jungle filled island my grandfather visited in 1947). I have been again since, in 2009. It is still a magical place, the people gentle and welcoming, the lush foliage and ancient temple shrines an interesting contrast to the restaurants, shops and villas. This temple visit is one of my stand-out memories of my first trip there – I hope to visit again one day.

Thank you for taking a Wednesday Wander with me 🙂