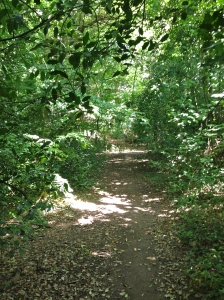 I’ve only been to camp once in my life. It was during Grade Eight, a class trip to the Canadian woods where we got to stay at a summer camp complete with dormitories and a washhouse and dining hall. There were crafts and toasted marshmallows and the vague threat of putting someone’s hand in a glass of water while they were sleeping, apparently guaranteed to make someone wet the bed. There were crushes and cute older counsellors, plus a ghost story about someone coming in through a window, then somebody actually CAME IN THROUGH THE WINDOW and we all screamed and moved about three feet to the right in a single terrified leap.

So it was pretty fun.

And now I’m about to head off to camp again. This time, however, it’s a virtual camp. I won’t need my sleeping bag, and the only people threatening to put my hand in water while I’m sleeping will be my family (and it will be pretty weird if they do that). There will, however, be stories.

I’m going to Camp NaNoWriMo this April, and am in a cabin with several other lovely authors, all of whom I hope like virtual toasted marshmallows. For you see, I have this vampire story just begging to be told, and several of you out there who are keen to see it written. So, in a moment of madness I signed on, with a goal of 50,000 words for the month. Then I remembered that school holidays run from April 1st to 18th, and so I adjusted my word count goal down to 30,000.

Well, I won’t deny I’m excited. I did NaNoWriMo in 2014 and ended up with a book, which is currently doing the rounds. So it would be great if I can achieve the same again, or at least get part way through. I have the same feeling I had when I did NaNo, of the story just waiting to be told, the world building inside my head. I can see how it all goes together, though a few plot points are still unclear. But they will come.

And if they don’t, I’ll go for a walk in the woods. Perhaps do a little craft. And then return to the cabin for another go.

22 thoughts on “Heading To Camp NaNoWriMo”