It’s the destination. The place that all the tourists know, heading north from the cool chic of Sydney to a place where gleaming towers line a golden beach, blue waves rolling in. In this shot, taken a little bit further along the coast, Surfers Paradise shimmers like some mythical Oz on the horizon, a place of light and dream.

The first time I went to Surfers was for a friend’s wedding (and that’s a whole other blog post in itself). We (hubby and I) rented an apartment on the 35th floor of what was, at the time, one of the tallest buildings there. The apartment was straight out of The Golden Girls, with rattan furniture and palm leaf prints, shell sculptures hanging on the walls. There was also a huge terrace with views on three sides, and a dizzying drop to the beach below. 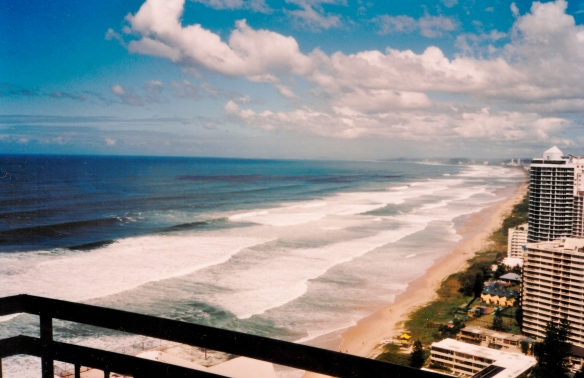 When I was younger, my great-aunt used to live in Florida, and we went to visit her several times in her condo near St Petersburg. Surfers Paradise felt so similar in every way that I had to stop myself several times and remind myself that I was not, in fact, in Florida. But the streets, the architecture, the palms and blue water, were just the same. And yet… Australia has a flavour all its own – if you’ve been there, you’ll know what I mean.