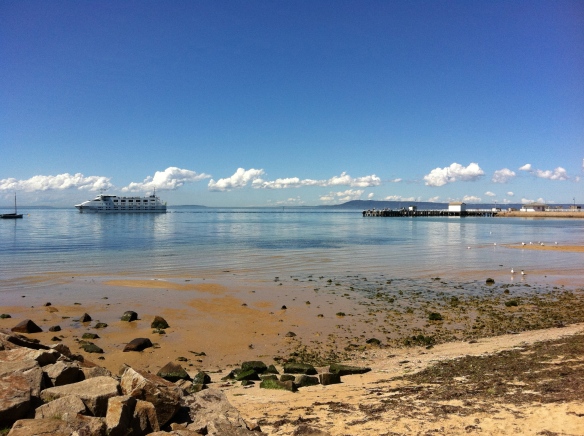 Arthur’s Seat is the promontory to the right of the picture. The car ferry in the foreground runs between Sorrento and Queenscliffe, a journey of about forty-five minutes across the Heads, or several hours if you were to drive around the bay.

Urf, it’s another hot night in the UK. Thunderstorms are on their way and I for one cannot wait. There’s nothing like the refreshing change, the ozone in the air, the fury of the elements – at least while I’m indoors ;-). When the weather is humid like this it reminds me of Australia, of several days in a row where the air would lie hot and heavy, the temperature above 30 degrees before 9am. Then the cool change would come, sometimes with thunder, sometimes just a fresh breeze, the temperature dropping literally in minutes. 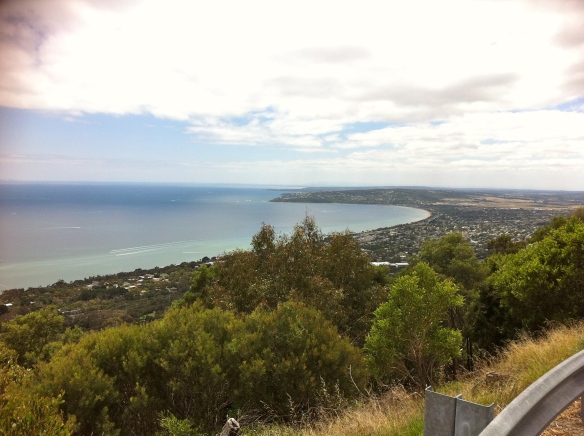 Looking back along the bay towards Melbourne. You can just glimpse the towers of Melbourne at the extreme left of the horizon, giving you an idea of the vastness of the bay.

Before we came to the UK (or returned, in my case), we lived on the Mornington Peninsula, just outside Melbourne. It was a beautiful place to live – we were there for seven years, and I just loved it. There are several tall promontories overlooking Port Phillip Bay – Mt Martha, Mt Eliza and Arthur’s Seat, named for the original in Edinburgh. Arthur’s Seat is the highest of the three and the views from the top are spectacular.

Looking towards the entrance to the bay.

In the photo above you can see the small towns strung along the curve of the bay – Dromana, Tootgarook, Rosebud, Rye, Blairgowrie, Sorrento, and the millionaires playground of Portsea. We lived in St Andrews Beach, on the ocean side of the Peninsula, where the land starts to curve towards the head. We were only a few minutes walk from the beach, waves pounding just beyond the dunes – I still miss hearing them at night.

From the top of Arthur’s Seat, the land stretches back in a ridge, the rich soil home to farms and vineyards, lush eucalypt forests and small towns. It is glorious.In fact, I think I’ll be wandering to this part of the world again, both in real life and on this blog. It’s a wonderful place to be.