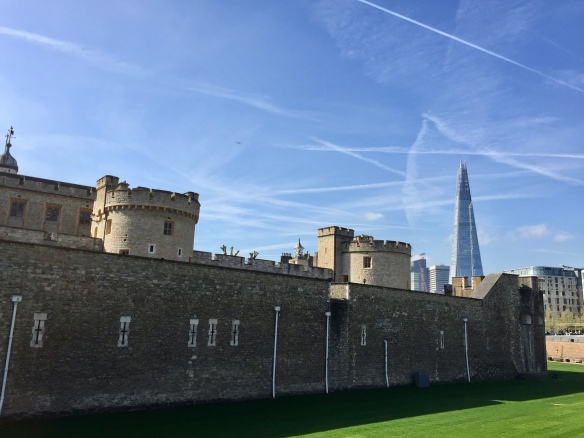 I could probably write about half a dozen posts about the famous Tower of London (and will definitely write at least one more). There are layers of history going right back to Roman times within the ancient walls, and the names of those who lived and died there are a rollcall of history. 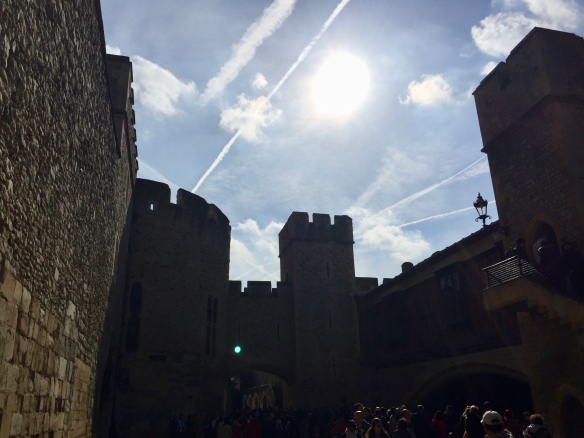 The Tower, a World Heritage Site, sits on the banks of the River Thames as it has done for almost a thousand years. It was founded by William the Conqueror towards the end of 1066, the year he and his Norman forces conquered England. However, almost a thousand years earlier it was a Roman site, the nearby fragment of Roman wall and exposed Roman stonework within the tower grounds testament to that history. It is best known, however, as a prison, even though it was not originally intended as one.

The White Tower, from which the Tower takes its name, was the first major building on the site, started around 1078. Designed as a keep with lodgings fit for the new king, it has been described as the best preserved 11th century palace in Europe. Opposite the White Tower is the entrance to the Waterloo Block, where the famed Crown Jewels are held. We did go in to see them, but no photography was permitted, hence the lack of pictures here. Suffice it to say, it’s hard to believe they are real, such is the size and brilliance of the gems. I do recommend that, if you’re visiting the tower, you see the jewels as early as possible, as it does get busy later in the day. We went first thing and were able to move through the various antechambers quite quickly, as well as taking two passes on the moving walkways past the jewels themselves. Later, however, there were large queues stretching out the door.

The tower, of course, has a fearsome reputation as a prison and place of execution, where not even being royal would keep you from the axe. Three British queens lost their heads on Tower Green – Anne Boleyn, Catherine Howard and Lady Jane Grey – as well as various members of the nobility. Others languished for years inside the various towers, or were sent to the dungeons to be tortured – this is a place where, if the walls could talk, the tales they’d tell would be difficult to hear.

Something perhaps not so well known is that the fortress also housed a menagerie. Founded in in the early 1200s by King John, animals from all around the world given as gifts or imported as novelties were kept for the amusement of the court. Animals housed there included a polar bear and an elephant – today, life size sculptures of the creatures can be seen around the grounds. Nowadays, the most famous non-human inhabitants of the fortress are the Tower Ravens, their wings clipped so they cannot stray far from the Tower. They are huge, the biggest ravens I’ve ever seen, their calls deep and barking and quite unnerving. There is a legend that states if they ever leave the Tower, the monarchy will fall and Britain with it.

We spent hours at the Tower, climbing worn stone staircases into creaking chambers, and down into dark dungeons, yet we didn’t see half of everything there was to see. One thing we did see, however, was a reenactment of sorts, where we had to choose an army to back when invading the tower. Each choice was based upon a real attempt, but only one, led by a woman, was actually successful (and she was the one we backed, too!). The reenactment was great fun – the actors really got into it and there was lots of audience participation. Set against the ancient backdrop of the White Tower it was very effective, one of those things English Heritage does so well. 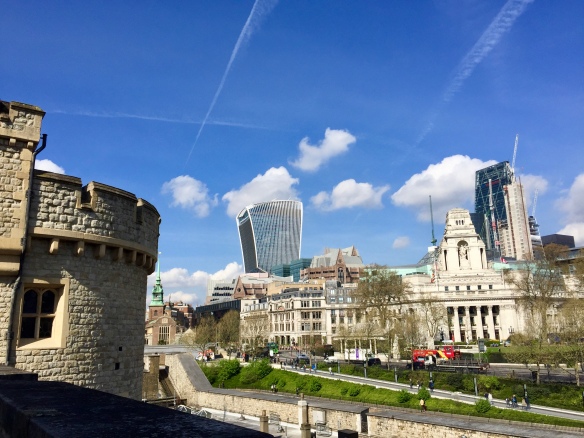 As I said at the start of this wander, I could write half a dozen posts about this place, and I know I’ve only scratched the surface of the many stories held within its walls. However, in the interest of brevity, I’ll sign off here… for now. Thanks for coming on another Wednesday Wander with me – see you next time!