Wednesday Wander is back! I had a little bit of a break due to work and health turmoil, but it’s a new year, all is well, and it’s time to wander again. This week I’m taking a closer look at a part of the Tower Of London. I’ve written about the Tower before, and looked at some of the many doors, but it is a place so rich in history and significant buildings that I could probably write another half dozen posts and not cover it. 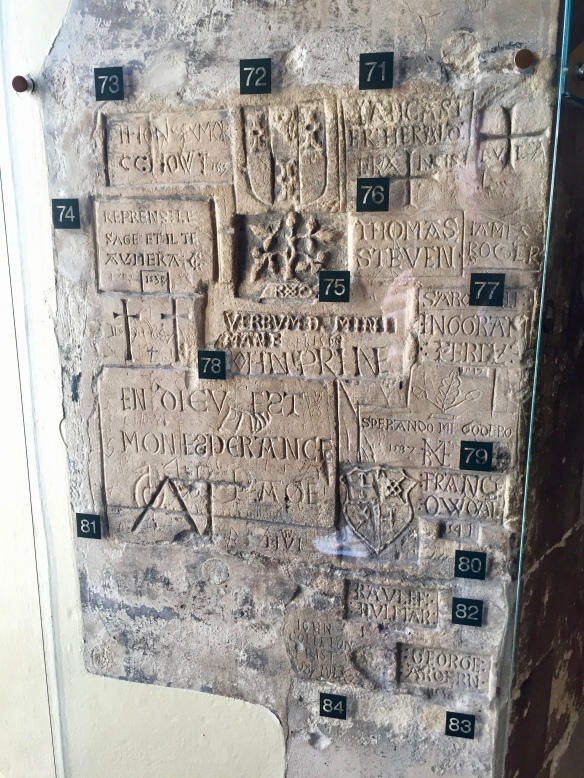 This week I’m wandering into the Beauchamp Tower. It looks and sounds rather a romantic place, but its history, as with many of the Tower buildings, is a sad one. From the 1300s it was used to hold high-ranking prisoners, including the Earl of Warwick (after whom the tower is named), the Dudley brothers, and Lady Jane Grey. Many of the prisoners, being wealthy and well-educated, left their mark upon the walls – this graffiti has been preserved and is now a popular attraction at the Tower.

The Beauchamp Tower overlooks the green where high-ranking prisoners, including Anne Boleyn and Catherine Howard, were executed. Lady Jane Grey watched from this window as her husband, Guildford Dudley, was beheaded, then was taken out and executed herself a short while later. The four Dudley brothers are commemorated within the tower in a piece of ornate carved graffiti, with roses for Ambrose, carnations for Guildford, oak leaves for Robert and honeysuckle for Henry.

Not all prisoners held in the tower were executed, but they must have seen their fair share of horrors through the leaded glass windows, and wondered whether they might be next. Despite the sunshine and the views, it was a cold place, not somewhere you would want to spend a lengthy amount of time. There are said to be ghosts in the Tower of London, and I wouldn’t be surprised if several of them were in the Beauchamp tower…

Oak and Mist, the first book in The Ambeth Chronicles, is on sale for 99c/99p until January 31st! Get your copy here

22 thoughts on “Wednesday Wander – Graffiti in the Beauchamp Tower”