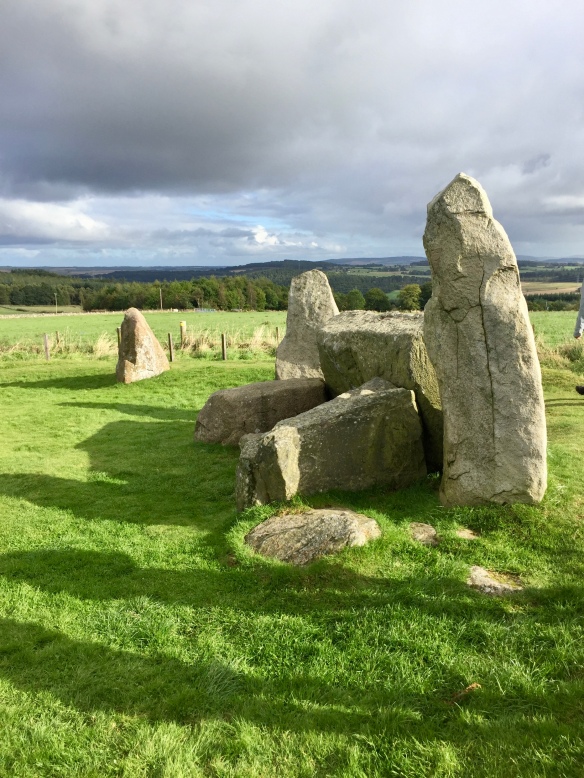 Along winding roads through green fields, the purpling hills beyond, we travelled back to where our journey began – Easter Aquhorthies. We returned to a circle transformed from the screaming wind and rain of the previous day – this time, the sun drew shadows from the stones, the distant peak of Mither Tap clear against patches of blue sky. There was still rain around, but none really came to trouble us as we once more found our stones and learned more about their alignments.

‘My’ stone was warm, welcoming again, and I gave it a gift, something I’d been carrying with me, looking for the right place to leave it. It seemed to have been accepted. I learned that ‘my’ stone aligned with the winter solstice sunset, and also with the viewing platform we could see through the trees… which also lined up with the circle and carved stone in the housing estate beyond. Truly, the people who created these monuments worked on a large scale and with great accuracy, the alignments of sun and moon and land precise to the decimal point. 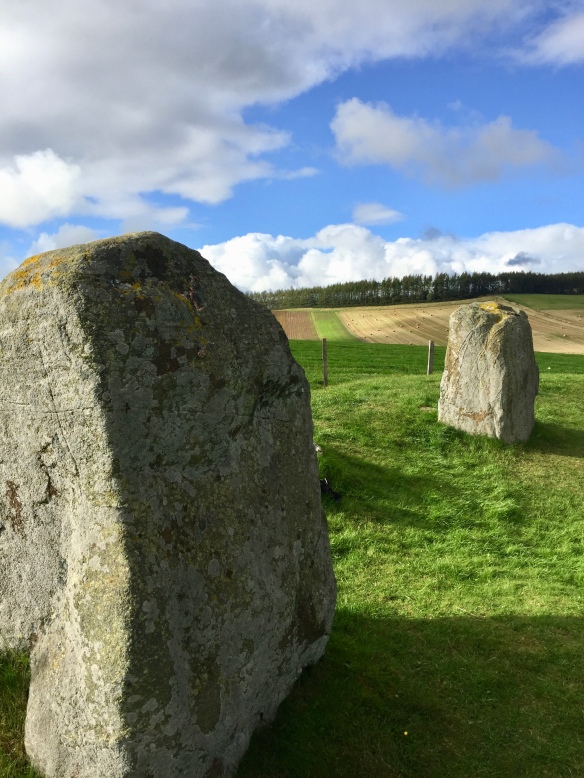 Another group came through to the circle, four people, and we could hear them talking amongst themselves, wondering what we were all doing. A joke was made about practising for the sacrifice later, and that we only needed four willing victims. They laughed, but didn’t stay too much longer – we were just joking, honestly!

One of the interesting features of the circle is the two smaller stones sitting against the huge recumbent. They are angled out slightly, almost like welcoming arms and, we discovered that, if you sit down between them, your voice will carry throughout the circle, even through howling wind. However, stand tall and it is lost. And so, with the weather a little kinder, Stuart treated us all to a gentle chant, the notes rising and falling around the stones, vibrating among us all. We were invited to join in, if we chose – I did not, choosing to listen again, my eyes closing as I leaned against ‘my’ stone.

… I stood with my back to the stone and could feel the alignments, arrow straight, running through me to the left and right of the stone, making a perfect angle. The alignments behind me didn’t matter – it was only the ones that ran in front of me across the circle that were important. I could feel the curve of the circle, too, and I was reminded of the shape I saw earlier, carved into an ancient stone – the broken spear, intersecting the curve. The lines were strong, the stone at my back comforting, a gentle guide…

I opened my eyes and the sky was transformed, rainbows around us, bright against the grey clouds. After the fierceness of the previous evening, it felt like a balm, a gift and, perhaps, an acknowledgement. If the storm and rain had been a test, perhaps we had passed?

After ooh-ing and aah-ing and taking photos, we left en masse. It was getting close to dinner time and we were all feeling hungry. After a brief moment of struggle when one of our party’s vehicles became stuck in a ditch (huge thank yous to the LandRover driver who pulled them out!), we headed back to our respective hotels with a plan to meet for dinner later.

To be honest, I was tired at this point. It had been a long and intense day, from the darkness at Cullerlie to the brightness of rainbows at Easter Aquhorthies. I was cold as well – despite the rain clearing it had been windy on the hillsides. My bed beckoned… but I decided to head out once more. It wasn’t often I got to spend time with the group, and I was looking forward to catching up over another meal. However, Saturday night in Inverurie coupled with the size of our group meant dinner bookings were hard to come by – we managed eventually, to find something.

I sat next to Stuart at dinner, and he leaned over and said ‘I have something for you. It’s a book.’ I was surprised, and got the feeling there was more to it than just something new to read. He continued,’ It’s from a friend of ours, who passed away. I’ve been told I’m to give it to you.’

Another coincidence. I’d never met the woman who owned the book, but remembered reading about her on Sue’s blog, and how she’d seemed quite a wonderful character. And now I was to have something of hers. It seemed fitting, on such a weekend, when the role of women was a theme that presented itself again and again, that I was to receive this gift. I felt honoured, to be honest – it was no small thing. And, as I sat opposite another new friend and reminisced about places and people we’d both once known, living in the same town for years but never meeting until this moment, I wondered to myself about the way the Universe seems to present things, waiting until the right moment.

Some of the group decided to head back up to Easter Aquhorthies – the night was clear and it was a chance to see the stars almost as the ancients would have, out among the hills. I declined – it didn’t feel like the right thing to do. Perhaps I was tired, or perhaps I felt unready, but I did feel that I might get the chance to do so again one day. So instead I went back to my hotel to rest, ready for the last day of our adventure…

This is my account of a recent weekend spent away with The Silent Eye. Click here for Part 1, Part 2, Part 3, Part 4, and Part 5.