It’s Sunday evening. The sky is washed with eggshell shades fading to blue, my cheeks still tingling from being outside. The working week awaits… and yet, the working weekend has just finished.

I’m currently deep into the final edit and formatting of Under Stone, book four in my Ambeth series, with a view to publishing very soon. This last push has been accompanied by lining up some associated promotion and deals, so it’s been a very busy time of late (which has made me a not-very-good blogger at the moment).

That being said, you may have also noticed a couple of new things on my blog. One is the mailing list sign-up. If you do sign up, I promise not to inundate you. Rather, I’ll just send through a newsletter once in a while with publishing updates, sneak peeks at upcoming books, the occasional competition and a few other goodies.

The other new thing is a shiny badge proclaming me a member of the 2018 Bloggers Bash Committee. I agreed (was talked into) joining the committee at this year’s Bash, and I’m enjoying being part of the team! Watch this space (and my newsletter) for news about next year’s event.

And now it’s back to formatting once more. The sky is now dark, the nights drawing in early. I don’t mind though – autumn, and the lead up to Christmas, are my favourite times of the year. I love the cold air and crisp leaves underfoot, the sparkle of lights and Christmas songs, good food and warm jumpers, Halloween treats and Bonfire night.

Wishing you all a good week, wherever you are! 🙂

I wrote the first draft of Under Stone more than three years ago. Since then it’s undergone quite a few edits and rewrites, then was sidelined for a while as I worked on other projects. Now that A Thousand Rooms is out I’m free to roam the forests once more, but the path to this story is still quite tangled.

As the fourth book in the series, Under Stone pulls together a lot of the plot lines set out in books one to three, so I’ve had to do a quick re-read of those books and make sure that I’ve covered everything. Even though Ambeth, the characters, their motivations and their plot lines all live in my head, there are small details I’ve added here and there that I need to keep track of. So far, so good. However, the story itself also needed re-ordering, so I’ve been shuffling scenes around and, in some cases, deleting them.

Making this slightly more complex is the fact that Ambeth deals with multiple character viewpoints. I know, right? A six book series told from the point of view of multiple characters. *shakes head* Also there’s a time twisting element, which sometimes is useful and sometimes really annoying (for the writer), as I have to keep track of what is happening when in two different worlds. But oh, I love it. I love the stories and the characters, and I love it when it all comes together and I can feel the flow. I guess that’s part of the reason I write, for that feeling – it’s a little bit like joy.

I think I’m pretty close to being done now. In fact, I’m hoping I might even be able to get it out to beta readers by the end of this month. So I’ll continue to slash and burn, moving branches and reshuffling scenes, forging a new path through the tangles in the hope I reach my destination soon.

How about you? When you write a story, do you then play around with the order of events to get the best flow? And, if you’ve written a series, how do you keep track of everything? (Notes. It’s notes, isn’t it? I really ought to make more notes when I’m writing.)

It’s Christmas Eve, and also day twenty-four of the 30 Day Writing Challenge. Today’s prompt is: Too Many

Now, the obvious thing to write about today would be presents- as in, is there such a thing as ‘too many’? If you asked my daughter I’m sure she’d say no. However, when I cast around for an idea, I only had a fragment come to me:

‘I love snow.’ I rested my chin in my hand, dreamy, watching spiraling white flakes fall against the dark trees. Outside it was cold, the sky a swollen grey, but inside all was warm and cheer. The fire was crackling, a blanket was tucked around me and the smell of baking – really, the only thing that could have made it more like a Christmas card would have been a small child singing carols.

How would you end it? I had a vague idea of the snow turning to a storm, the power going out and the idea that there was such a thing as ‘too many’ snowflakes. However, it seemed a bit of a stretch and so I’ve left them as is, comfortable and warm in their living room, watching the snow fall.

And perhaps that’s where I’ll leave you all too, as night falls and Christmas beckons. Wishing you all a wonderful holiday season, however you choose to celebrate xx

Kind of how I felt on the trip…

Happy Friday, everyone! Just a quick update post, as my week has been thrown into slight disarray by a snot monster who has decided to take up residence in my sinuses. Blegh! Could be worse, though, I know that.

Streaming eyes and the fact that the front of my face feels as though it’s about to explode off into the ether means that I’ve not been able to sit at a computer for long these past few days, so that meant no Wednesday Wander or Thursday Doors, as well as no popping round to visit other blogs as often as I like to do. I made the (huge) mistake of deciding to still go on a school trip on Wednesday, as I was feeling ‘a bit better.’ Hahahahahahahahaha. I was not. So, while wandering around an Anglo-Saxon village would have been right up my alley most days, all I could think about was when we were going to get back on the coach and go home.

Anyway. Enough wingeing about my cold. Like I say, it could be worse. So, in terms of actual writing, here’s what’s been happening:

A Thousand Rooms is in the final stages of formatting, and I’m hoping to have a cover design to reveal to you all soon. Also, if any of you lovely people would be happy to have me come over for a visit and talk about the book, I’d love to (and would be happy to return the favour). Let me know 🙂

Other than that, another book idea that’s been on the back burner for a while has surged to the forefront, with an opening scene (maybe the opening scene) playing itself over and over in my mind. The story is intriguing me, and I can see the layers forming, each character becoming more complex. So I guess it’s time to start writing it down…

Under Stone, my fourth Ambeth book, is also knocking at the doors of my subconscious, demanding I pay it some attention. It was already written, but some slight adjustments I made in the first three books need to be added and played out in this fourth book, so there’s a bit of structural work to do. How do I know it’s been knocking? There’s a piece of music I associate with writing the Ambeth books, and it’s been playing in my head this past week or so (it’s getting quite crowded in there now, what with the other book and the snot monster and life in general and now music – maybe that’s why I have a cold).

But the weekend now beckons, and hopefully a chance to rest and get back to health. Plus do some writing, of course…

Wishing you all a lovely weekend x 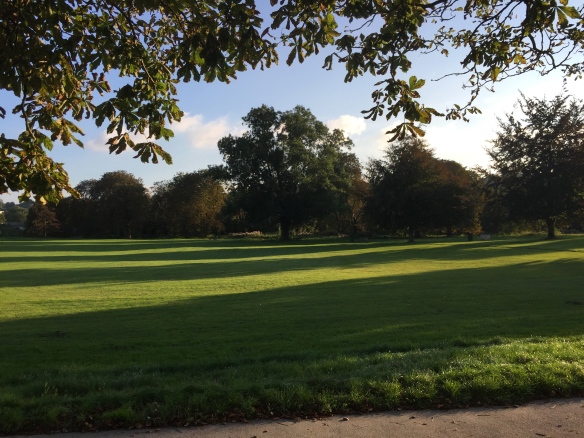 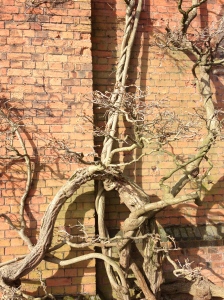 Bleurgh. It is amazing how much a head cold/chest infection thingy can cloud the thinking. I had great plans this week for editing and writing and letters and submissions, not to mention a bit of exercise now that the weather is warming up. However, they have been overtaken by a desire to sit huddled under a blanket on the sofa as I mainline peppermint tea and crisps, trying to shake a nasty bug.

There seems to have been something in the blogosphere this past week – Lucy at BlondeWriteMore, Kristin at pursuitofanewadventure, Sue Vincent at The Daily Echo and Allie Potts were all struck down as well, making me wonder whether viruses travel through the web, digitised and sentient, searching for their next innocent blogger victim.

And this is what I mean by a woolly brain! What a thing to think. And yet, is there a story in it? This delirium thing might be useful after all… 😉