If you like participating in writing challenges, Esther Newton often posts them – they are always interesting, and can be as short as six words long (a lot harder than you might think!). Her Monday Motivation for this week was to write a story of no more than 150 words, including the phrase ‘It was a matter of life or death.’ 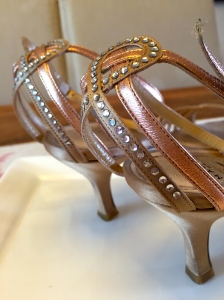 It was a matter of life or death.

Well, socially, at least. The shoes glittered as they turned on the little pedestal, faceted stones catching the light, smooth leather straps gleaming.

They were gorgeous. And far too expensive. But she could think of so many places to wear them, now that she was moving with a new crowd. And she really needed to keep up.

She bit her lip. So she’d have to eat baked beans for a month. She’d probably lose weight anyway, always a bonus. Binky had grabbed her round the hips the other day, squeezing and shrieking with laughter. ‘Oh darling, are you sure you want another profiterole?’ She had joined in with the laughter, blushing as chocolate oozed soft on her fingers, wishing she could throw it into their smirking faces.

Decision made, she picked up the shoes.